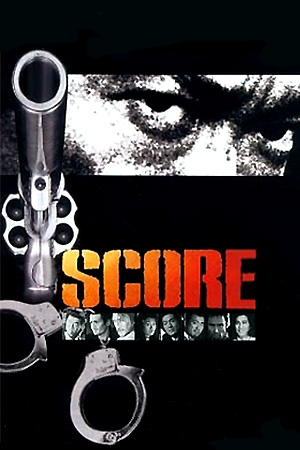 I was easily pleasured when I was younger, like a bottle of cheap cider, UK company MIA’s release of ‘Score’ satisfied me in terms of providing Asian guys in sharp suits shooting at each other with double .45s. I remembered this movie as a tour de force of blood squibs, explosions and angry exchanges in Japanese by scowling Hitoshi Ozawa with a prize mullet on his head.

Time is a cruel mistress. Going to show that sometimes memories are better than revisiting the actually memory, nine years on ‘Score’ is fucking crap. Not that ‘Score’ comes from a fine cinematic background. As far as I’m aware it’s nothing but another video action movie of its time, a film MIA on its box claimed to be ‘the nuclear warhead of Japanese action cinema’. If so, someone should give North Korea a copy as it is as nuclear as a damp firework.

The plot concerns a jewel heist going wrong and the four robbers; Chance, Tequila, Right and Peking Duck holing up in a warehouse to await their employer with the money for their booty. Little do the other three know that Chance is expected to sell them out and fill them with lead. Add in two weird hitchhiking killers called T.J. and Sara and you have one mess of a film.

Not that I am expecting high art from what is a low budget Japanese action film but this film really is awful. Not only is it awful but it is merely a composite of several movies crudely stitched together with little in the way of coherence, nor, in Italian style, is the nonsensical nature of the production offset by stand out set pieces. Instead John Woo’s ‘Hard Target’ is gutted of whole scenes, right down to dialogue and names, along with ‘Reservoir Dogs’ which is ransacked in a manner that makes no sense whatsoever. A character is revealed to be a copper, right at the end. Other than slapping on another layer of farce it is utterly pointless.

The action scenes do have some merit, they are obviously edited together from various takes but they are frenetic enough and bloody enough to keep your attention. The factory makes for a dull setting, there’s only so many pipes that people can duck behind before it becomes boring. Boring also describes the poor excuse for a truck chase which is so feeble it is out of a Bruno Mattei film in all but name.

I could go on. The lead villain’s henchman seems moulded from plastic and wears leather trousers, the cops are supposed to be American sheriffs but are obviously Thai or something with badly made up cars.

Waxing lyrical about this movie is such a drag.