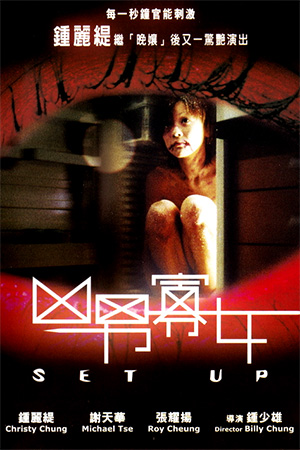 Successful horror novelist Moon Siu (Christy Chung) lives the high-life and is mere days away from her very own fairy-tale ending. The latest instalment in her popular vampire hunter books is nigh-on complete, less than forty eight hours will elapse until her wedding with long-time fiancé, Tak (Michael Tse), and an unforgettable honeymoon the tropical paradise of the Maldives comes to pass, as well as the more immediate prospect of finally curing her myopia through LASIK surgery. Ironic how one tiny fly in the ointment can throw even the best laid plans completely out the window. Post corrective surgery Moon’s surgeon, and sister Yan’s (Winnie Leung) boyfriend, Edmund (Johnny Lu) advises she is within the miniscule percentage of patients sensitive to the treatment and will remain visually impaired for approximately 72 hours. Rather than allow her recovery to be impeded, Yan spirits Moon back to the couple’s countryside villa to recuperate.

With Moon resting under the aide of sedatives in a downstairs bedroom, the lead-up to the wedding promises to pass smoothly, and a late evening sneak-visit by Edmund further helps Yan wile away the time. The only incongruity that nobody could have allowed for is the intrusion of three violent criminals, Pao (Roy Cheung), Kei (Tony Ho) and Man (Marco Lok); desperate men on the run with a haul of gold bullion in tow, and precious little patience to sit out the extended wait until their buyer shows for the trade-off. Brutally butchering Edmund the moment Yan indisposes herself in an upstairs bathroom, Moon’s younger sister quickly finds herself face to face with a volatile situation. As explosive events escalate, and Yan finds herself repeatedly under sexual threat from the repugnant Kei, it’s only a matter of time before Moon awakens and finds herself similarly in unspeakable danger. With time rapidly counting down, events steer erratically towards the panic-stricken authoress, and her vestigial remaining senses, having to outwit and overcome her homicidal home invaders with blind cunning alone.

Coming on like a New Millennium retread of Chan Wing Chiu’s ‘Retribution Sight Unseen’ (1993) (aka: ‘3 Days Of A Blind Girl’), with hints of Terence Young’s ‘Wait Until Dark’ (1967) and William Wyler’s ‘The Desperate Hours’ (1955) thrown in for good measure, Billy Chung’s ‘Set Up’ (2003) is, put succinctly, terrible filmmaking that it’s maverick director, and super producer Wong Jing, would probably have preferred to stayed permanently shelved in Chinastar’s vaults. Bearing a copyright imprint of 2003, this Chinastar pick-up from (former) low budget production house S & W Entertainment, was rescued from the archives for brief Hong Kong theatrical play dates in June of 2005 before being unceremoniously dumped to DVD a whisker over two months later. Like its compatriot S & W acquisition ‘Ghost Office’ (2001), upon immediate viewing it’s not hard to discern why Chinastar opted to sit on this title for a couple of years before haphazardly releasing it, perhaps with intent of at least attempting to recoup some of their losses. For a straight-forward thriller, designed as an ensemble piece that trades on both its threat of violence, as well as the vulnerability of its protagonist (Christy Chung), ‘Set Up’ is scarcely able to generate even rudimentary tension and is so devoid of menace that it ends up simply lumbering from one scene to the next. The obvious question then becomes, what went wrong?

As a low budget auteur, in the past Billy Chung has more than proved himself capable of constructing tight, efficient thrillers under the auspices of independent production house Buddy Film Creative Workshop; ‘Killer’ (2000), ‘Paramount Hotel’ (2000), ‘The Cheaters’ (2001) and ‘Shiver’ (2003) all economically attest to that fact. Herein though, saddled with a workmanlike, creativity barren script by Wong Jing, as well as a lead actress left unfettered enough to deliver a performance so overblown that it could be construed as amateurish, Chung seems to struggle against the elements. While his leading lady is stumbling around in the dark, either delivering the ludicrous stream-of-consciousness dialogue Wong has written as substitute for internal monologue or pulling embarrassing faces into the camera lens, Chung wrestles to keep hold of the slender plotline lest it slip through his fingers and become lost in the picturesque hillside locations. Indeed, it could be argued that had this been released when originally intended, Christy Chung’s Hong Kong film career may not have reignited as it did post ‘Fantasia’ (2004). Thus, as compensation, our beleaguered director constantly shifts our attentions to the internal politics and smouldering deceit inherent amongst his antagonists – the criminal trio of Roy Cheung, Tony Ho and Marco Lok. Sadly, even our three primary miscreants are cut from distinctly one-dimensional cloth, with only Marco Lok making the most peripheral of focal dents with his brooding loner persona.

Rummaging amidst the scraps left over, Joe Chan’s cinematography imbues the piece with an occasionally gaudy yet wholly gritty, grainy ambience that at least lends Chung’s theatrics an identifiable gloss, which are indelibly heightened by Poon Hung’s rapid-fire and showy editorial flourishes. However, one of the most integral elements of a good thriller, its score, shows just how far off the mark Billy Chung was with this outing as Alan Wong’s eminently forgettable compositions meander lazily between melancholic synth harmonicas and banal heavy rock, instilling proceedings with as much mood of threat as John Williams might have achieved had he opted for a disco beat with ‘Jaws’ (1975). Perhaps the greatest flaw of the film overall is Wong’s script and its Point A to Point B structure as well as the manner in which it paints the majority of its focal players. It’s fairly obvious from the outset, thanks wholly to the ambiguity and absence of former ‘Young & Dangerous’ (1996) pin-up boy Michael Tse’s Tak, as to where his character is heading and his complicity in the events. Likewise, the disturbing interplay between Winnie Leung’s (‘New Blood’, 2002) Yan and Tony Ho’s predatory Kei, has only one possible outcome, and it’s none too pleasant when it eventuates. Even the appearance of a spear-gun as a wedding gift (whatever happened to rice cookers or bed linen?) in the first act falls under the rules of theatre as a precursory set-up for the finale.

Which inevitably nails exactly where the film consistently goes wrong: it is leadenly predictable and never once strays from its by-the-numbers formula. The perfunctory twist ending coda is downright embarrassing for all involved, only succeeding in adding further insult to already crippling injury. As you might have guessed by now, there came a point not far into this forgotten ‘gem’ that I not only felt cheated of good money, but positively inspired to revisit the Veronica Yip opus it was modelled from as a reminder of how this should have turned out. Definitely a blight on Billy Chung’s eclectic cinematic oeuvre, ‘Set Up’ is a formerly shelved title that should have remained buried indefinitely.