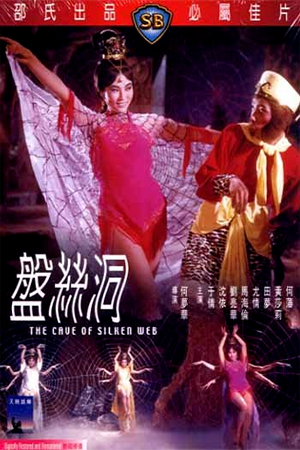 As we pick up the adventures of our travelling heroes, we find them stumbling upon a mystical area of land inhabited by witches known as the ‘Seven Spiders’.  Unfortunately for them, the witches believe that eating the flesh of a monk will grant them immortality so they become hell-bent on separating the monk from his protectors.  Of course, Monkey is extremely skilled in magic and fighting so the witches know he is the major obstacle but utilising the weaknesses of Pigsy they manage to entrap the monk.  With a seemingly unbreakable web surrounding the witches lair, it’s up to the Monkey to devise a cunning plan to free his master so that the scholar may continue his epic journey to the west.

The numerous tales of the Monkey King have always made for intriguing cinema and the Shaw Brothers series (made up of ‘The Monkey Goes West’, ‘Princess Iron Fan’, ‘The Cave Of The Silken Web’ and ‘The Land Of Many Perfumes’) is certainly one of the finest incarnations of the classic saga to date.  ‘The Cave Of The Silken Web’ is the third part in the series and arguably the finest, mainly thanks to newly found fluidity within the storytelling that is now combined with the superb casting, striking sets and outrageous effects that have remained stable factors throughout.

Chow Lung-Cheung picks up the reigns as the Monkey King for this movie (replacing Yueh Hua) and proves himself just as capable, putting in an extremely energetic leading performance that is complemented perfectly by Pang’s comic relief as Pigsy.  Alongside them, this part has the added bonus of the seven witches who all bring their own unique traits to their respective roles and possess suitably eccentric powers.  Special effects and action are also a vital ingredient within this fantastical legend and both are extremely well represented here.  Obviously, considering the time period, they are fairly basic but the dated special effects certainly add a nostalgic feel whilst the limited action retains an innocent charm.

If you’re in the mood for a crazy adventure filled with amusing characters and extraordinary ideas, then you can’t go far wrong with any of the films in this quartet.  This particular entry is easily my favourite and, as with most Shaw Brothers productions, it is expertly constructed with a timeless approach to filmmaking.