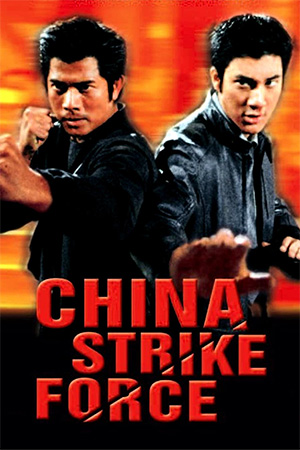 Darren (Kwok) and Alex (Wang Leehom) are two members of China’s elite law enforcement team. While attending a fashion show organised by Alex’s girlfriend, the partners witness the assassination of one of the guests and give chase to two suspects: the first is the super-charged assassin chased by Darren; the second is an alluring Japanese woman who appears to take something from the body of the victim. After both parties escape, Alex and Darren focus their investigation into the reasons behind the death and the real identity of Norika – the mysterious Japanese woman. When the probing inquiry continues and local businessman Ma is suspected of some involvement, a drug smuggling ring is uncovered alongside local corruption within the police force. Implicated in the plot is Alex’s future father-in-law (Paul Chun Pui) and the nephew of Ma (Dacascos). The double-crossing  and subterfuge reach a conclusion with the revealing of Norika’s hidden motives and the inevitable all-action finale.

Critical opinion is sharply divided on the recent slew of Hong Kong ‘Blockbusters’ and ‘China Strike Force’ is no exception. Many have lambasted the obvious allusion to the big-budget Hollywood action features while others have tried to gain some comfort from the ambitious nature of the film. It’s hard to sit completely in either camp as this is a production of wildly differing qualities and weaknesses. It’s perhaps ideal to isolate and examine both aspects.

First the positive points. The main reason that many would flock to ‘China Strike Force’ is the much-heralded spectacle on offer. In this department the film ranks as a success. Although there isn’t as much action as the first 30 minutes implies, when it does come it is well worth the wait. Harking back to the kind of crazed adrenalin-rush that made Hong Kong so famous, ‘China Strike Force’ features some incredible stunt-work that will have many reaching for the rewind option. Director Tong also makes sure that all of the main cast look adequate as screen fighters; this isn’t necessary in the case of Dacascos, but Fujiwara and Kwok look surprisingly effective. This is dampened with the use of awkward wirework gimmicks however, but for the most part the film delivers a good standard of fight action. For all the criticism Aaron Kwok seems to receive with every starring role, here he plays to his strength and even figures in a pleasant few moments of self-deprecating humour.

‘China Strike Force’ is far from perfect though as there are enough unfortunate inadequacies to undermine what could have been an excellent piece of entertainment. For a narrative that takes itself very seriously, there is some very silly looking tricks and stunts appearing throughout. As was said, the fight scenes often utilise ridiculous wire-fu that takes away some of the excitement from the overall production. Even within the stuntwork there are moments that simply add confusion to the finished film; notable among these is the moment when Kwok rides a bike up the back of a truck and then performs an improbable follow-up stunt. ‘China Strike Force’ also pulls out every Hollywood action movie cliché in the book with obvious double-crosses and stereotypes that were tired ten years ago let alone now. This tiresome aspect means that much of the momentum is lost and that the scenes of drama are definitely not as polished as other parts of the film.

Summing up then, ‘China Strike Force’ is good but often found wanting. It’s worth watching, but will not go down as the best film that Hong Kong has produced in recent years – far from it in fact.