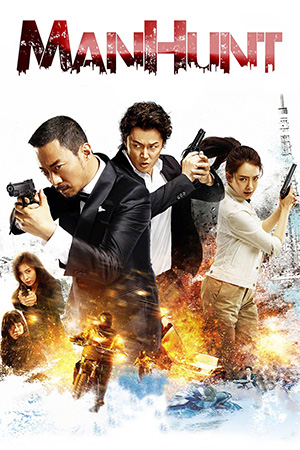 After a couple of ‘Red Cliff’s and then a couple of ‘Crossing’s, John Woo returns to the modern day, Eastern set, action film that made his name. Shot primarily in Japan and based on the novel by Juko Nishimura (previously adapted to the screen in 1976 by Jun’ya Sato), ‘Manhunt’ features all of Woo’s trademarks for better or worse: OTT set-pieces, check; doves, check; an abundance of absurdity, check.

Du Qiu (Zhang Hanyu) works for a big time pharmaceuticals company in Osaka as one of their top lawyers. He intends to leave the company but in doing so is accused of the murder of a socialite (Tao Okamoto). Professing his innocence he goes on the run with a determined cop (Masaharu Fukuyama) and a pair of lethal assassins hot on his trail. Gunplay, slow-mo and chaos reign supreme.

It’s good to see Woo back on his old stomping ground and ‘Manhunt’ is certainly entertaining in parts but is, unfortunately, a far cry from the director’s heyday. The set up is great: a man on the run, cops and killers after him, double crossings a plenty, all rife for the director’s talent at staging momentum and delivering loads of fun. Alas, this is all undone by slipshod editing, squirm inducing dialogue and the constant need to coat everything in endless slow-motion, dissolves and highly inappropriate music. Once the master of utilising slow motion to enhance the action and ramp up the cool factor, Woo overdoes it here (often in scenes that don’t need it) but nowhere near as much as the dissolve transitions. Relentlessly used in most scenes, action or otherwise, the dissolve cuts deaden any tension or sense of flow often to infuriating heights.

It’s not just the editing techniques that hinder ‘Manhunt’. Rather than a welcome return to the bag of tricks Woo use to unleash in his modern actioners, they just feel tired and stale here. In fact, the director feels like he’s running on empty, never finding a pleasing balance between drama, action and tension. For the first hour at least, the action is underwhelming, the drama trite (hindered by some terrible dialogue) and proceedings taken far too seriously for what is essentially a chase thriller. Perhaps Woo intended to make a more serious thriller, rather than an action film, but the tone is a stop-start, mish-mash of themes, sub-plots and genres that never cohere.

Fortunately, there is salvation come the home stretch. The last 30-40 minutes manage to inject some fun with at least two barnstorming set-pieces worthy of Woo: certainly the sustained shootout at a farmhouse. Once the big reveal comes, the film kicks into complete OTT territory and, dare I say, is actually all the better for it. Any artistic pretensions are dropped and the action fun and silliness flow.

Not the return to modern action many a Woo fan may have hoped for but fun in fits and starts if you can forgive its flaws. However, it may be time to retire the doves and slow-mo.