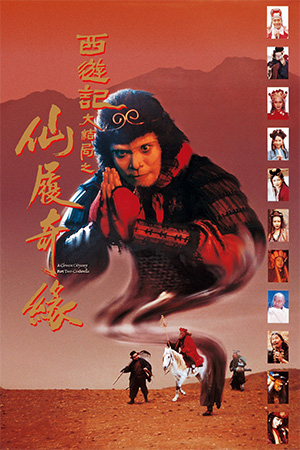 After using Pandora’s Box in an attempt to save his wife, Joker (Stephen Chow) finds himself hurtled five hundred years back into the past. There he meets Zixia the Immortal (Athena Chu), a strong swordswoman with a split personality who begins to make his life a living hell. While Joker struggles, in vain, to get back to his wife, he stumbles upon his old master, the Longevity monk. This reunion gives him the opportunity to return to his original form as the Monkey King, but doing so will mean leaving behind all human desires and forgetting about the woman he loves.

‘A Chinese Odyssey Part 2’ is a direct continuation of the story that picks up right where the last film left off. Clearly both parts were shot at the same time so this means that the movie is pretty much a case of more of the same. All of the cast continue to impress and there’s plenty of enthralling new fantasy elements and characters to sink your teeth into. My only minor gripe would be that Lau chooses to introduce a flurry of new female characters for this second outing. While there is nothing wrong with any of them specifically, their inclusion does often make it a little tricky to keep up with exactly who is supposed to be in love with whom. Luckily though, it all comes together in the end and the film closes on an extremely touching note.

It’s also worth mentioning that there’s a fair bit of action included in this part. As it was shot in the 90s, the choreography is very typically New Wave, with lots of sweeping camera motions and acrobatic swordplay. This is probably a sensible approach as it doesn’t detract from the magical elements and gives the combat a much more mystical edge. The highlight of the piece is definitely the finale which leans more towards fantasy rather than an all-out fight fest. Stephen Chow’s Monkey King is particularly impressive and the use of his familiar powers are an absolute joy to watch.

If you enjoyed the first ‘A Chinese Odyssey’, then this second part is pretty much guaranteed to please. It hits all of the same notes and provides a fitting conclusion to a well-made story.