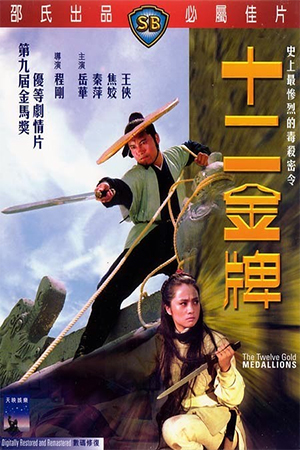 Thanks to Celestial’s excellent variety of early releases, I’ve been given the chance to truly appreciate the talents of Shaw Brothers actor Yueh Hua. Whether he is playing the hero or the villain, Hua effortlessly moves into character and has that rare ability of either drawing on gentle naivety or powerful gravitas. ‘The Twelve Gold Medallions’ is another opportunity for viewers (myself included) to see Yueh Hua tackle the lead role and take on the mantle of hero once again.

The film starts with a necessary historical exposition explaining the delicate position of the Sung dynasty and the various figures desperate to take over the throne. The main threat to the Chinese throne is  bloodthirsty Tartars who begin to descend towards the capital with rulership on their minds. General Yue is one of the few generals with an army powerful enough to stop this invasion, but his own fate is in the hands of traitor and kung fu master Jin who has twelve gold medallions that will signal the end of Yue.  Jin sends out messengers to deliver these medallions and therefore leave Yue’s considerable force directionless, open for an easy attack by the heinous Tartars. Standing in the way of this act is Miao (Yueh Hua) – a master fighter and former student of Jin who has turned against his master to side with the patriots. Alongside Miao is Jin’s daughter Suo who was betrothed to Miao before her father’s lies drive a wedge between the pair. Reluctantly, but vitally, Miao and Suo join forces to stop the medallions arriving in their destination; their path to them is full of incident and confrontation with Suo sustaining a serious injury from a top ally of her father’s. With Jin being one of the greatest fighters in China, the only chance Miao has is to call on the services of the so-called ‘Green Bamboo Master’ Meng, a righteous master who, although detached from the political turmoil of China, eventually agrees to help. Inevitably then, the increasingly ruthless Jin meets his main nemesis Meng while his daughter and former student attack the final band of messengers.

Although this Shaw Brothers swordplay film was produced during the earlier days of the studio’s heyday, ‘The Twelve Gold Medallions’ still boasts the stamp of quality that viewers will expect. With the excellent use of various differing environments, director Ching Gong makes full use of his production budget and ensures that there is a strong visual flavour throughout.  Drawing on a mixture of King Hu’s narrative mastery and the stylised action of Japanese chambrara cinema, Ching Gong proves his mettle with this fine swordplay drama. Yueh Hua is the epitome of heroism and attitude as Miao, but it is perhaps Chin Ping as his unlikely accomplice that steals the film.  Chin is hot-headed, yet lovable and superbly handles the multitude of situations she finds herself in, proving herself more than capable in the action scenes. Obviously the choreography is slightly archaic, but it does hold up well today considering its age; the fights are imaginatively shot and developed which tends to mean that they still appear interesting today.

‘The Twelve Gold Medallions’ tends to lose points due to aspects which Ching Gong would’ve been expected to control.  The narrative hinges on the motives of the main characters and their main drive, but this is never fully fleshed out. Chief enemy Jin sides with the Tartars by even attempting to kill his own daughter, but there’s little explanation of why. Undoubtedly the character is portrayed as greedy and power-hungry, though his seeming willingness to kill Suo is barely mentioned. The opening explanation of the history behind the storyline serves an important purpose as it guides the uninitiated into the martial world – nonetheless it doesn’t give the characters’ ambitions any more background. With a touch more attention from director/writer Ching Gong, this flaw wouldn’t have been quite so pronounced. The bottom line, though, is that ‘Twelve Gold Medallions’ is still another superior release from Celestial. Strong performances, intelligently filmed action and an all round aura of quality mean that this comfortably hits a four star rating.