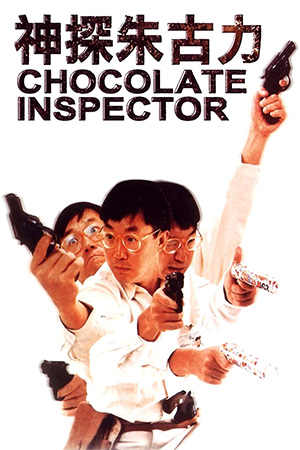 Inspector Chocolate (so-called because of his love of Smarties) and loyal assistant Egg-Tart (guess the reason behind that name) are members of the Special Crime Bureau, albeit somewhat unsuccessful ones. After another bumbled case, the two are put in charge of the far from exciting world of missing persons. Added to this is the burden of playing babysitters to the chief’s glamorous daughter who divides her time between her police work and attempting to win the Miss. Hong Kong award. When one of the sons of a popular TV. cook is kidnapped, the mismatched three are put on a trail with very few clues. Gradually the trail becomes clearer and suspects are appearing from all corners of the city; will Inspector Chocolate bumble another big case?

Comic maestro Michael Hui scores a resounding hit with this fast-paced combination of mirth and mystery. Once more Hui displays the ‘Deadpan Cool’ that has won him a legion of fans from all over the world (including myself) and numerous critical plaudits. Although Samuel had long since left the team, Ricky supplies the film with another excellent supporting role as Egg-Tart – Inspector Chocolate’s long-suffering assistant. The cast is then completed by Anita Mui (an early role) and Sibelle Hu who both give the narrative another level with successful representations of the model/policewoman and the deeply upset TV. cook. It’s also true that Philip Chan’s direction is very capable and it speaks volumes for his skill that Inspector Chocolate could stand alone as a drama. It is the aforementioned Michael Hui who really runs the show, however. When put into various sticky situations, it is always a joy to watch how Michael bumbles his way through while his face betrays very little emotion. The stand-out scene for this and indeed one of the film’s hilarious highlights is when he is forced to disguise himself as a very unsteady little old lady; a must see moment. Chocolate Inspector is another touch of class from one of Hong Kong cinema’s masters.