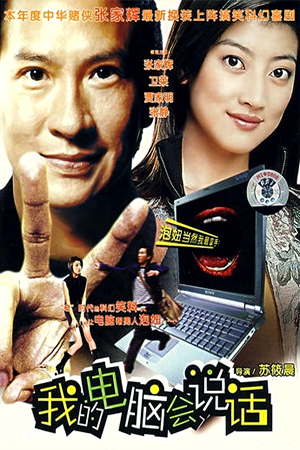 Nervy computer programmer Ming (Cheung) is infatuated with beautiful weathergirl Jing (Wei Lai) and desperately tries to muster up the bravery to approach her. Unfortunately his first real meeting with her is an acrimonious one as Jing is furious that her secret admirer has circulated a picture of her throughout the office and decides to take legal action. While Ming is saddened by this outcome he is still determined to reveal his true feelings and he is eventually aided by a laptop that has acquired artificial intelligence due to a freak accident. Armed with information on the opposite sex thanks to his computerised companion, Ming tries to utilise it with the woman he loves before the dreaded day in court arrives.

As a long-time champion of underrated Hong Kong director Derek Chiu, I was delighted when ‘So Good’ reviewer Kenneth Brorsson alerted me to this new release. A low budget rom-com that slipped under the radar of just about everyone, the prospect of ‘Love Is Love’ had me envisaging another ‘Love Au Zen’ or even the recent ‘Love Trilogy’. Unfortunately, this Mainland production is a major disappointment, making scant use of Chiu’s abilities even within this film’s triumvirate of directors. The quirky, off-kilter style that is the Derek Chiu stamp is completely absent from this pallid, trying production; if Mr. Chiu had any input into this film other than making tea for the cast and crew, I would be surprised not to say disappointed.

Nick Cheung is wooden though that term at least implies he is three-dimensional which he is not. After Johnny To gave him such a chance to shine in ‘Breaking News’, it’s difficult to see him play a supposedly sympathetic character so blandly. He’s certainly not helped by his woefully written part and having to appear besotted with such a harpy of a love interest – Jing is a whinging tyrant who we (and, you would think, he) care little about. Cheung is also paired up with a ‘supercomputer’ with a particularly atonal Mandarin drawl, spouting out such incisive remarks on relationships as ‘If you ask her out there is a 50% chance she will say ‘yes’ and 50% chance she will say ‘no’; why thank you Mr. Computer for unravelling the mysteries of the fairer sex. Surrounded by such figures, you half expect Ming to jump in the Huangpu river and be done with it.

‘Love Is Love’ has one minor saving grace and that is the ever watchable Shanghai locales. The directors make reasonably good use of the settings and at least allow the very tiresome drama to have the air of the exotic. However, any danger of being seduced by Shanghai’s sights is beaten out of the viewer by a cacophonous piano score which overpowers every single scene. The soundtrack offers the kind of sonic assault that the C.I.A could make use of next time they want to overthrow a government. ‘Love Is Love’ is a skeletal rom-com with every feeling sucked out and populated by people you would cross the road, no the M4, to avoid. Such drastic action might also be taken when confronted by a potential viewing of this film.