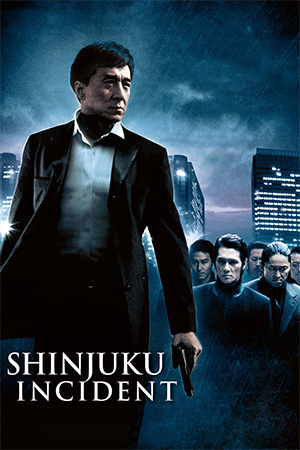 ‘Shinjuku Incident’ shows Jackie Chan in a role that we’ve not seen before, well at least not since ‘Crime Story’, and that automatically makes it a film well worth checking out. It’s a dark thriller which has Chan playing it straight without his comic slapstick sense of humour, and that is certainly a break from the norm.  But is it any good?

Jackie Chan plays Steelhead (I have friends called copperhead and lead feet so I guess I can let that slide), an illegal immigrant who was working as a Chinese farmer until his childhood sweetheart, Xiu Xiu (Xu Jinglei) went missing in Japan so he travelled to find out where she is.  He’s helped by Jie (Daniel Wu) and settles into life in Japan with other illegal immigrants, doing odd jobs while trying to adjust to his new life.  It’s at one of these jobs he finds Xiu Xiu and after a serious case of wrong place wrong time, he discovers his childhood sweetheart is with a Yakuza boss and things take a dark twist as Steelhead himself gets involved in some shady dealings in the underworld.

Okay, so the plot isn’t the most gripping as it deals heavily with the Chinese immigrant issue, even with a factual statement at the end of the film. What it does show though, and I’m going to put my neck on the line here, is that Jackie Chan can act. This is his film, in fact if it wasn’t for JC this might have just ended up as a run of the mill thriller. Gone is the over-acting that comes with many a year of slapstick comedy and in comes a ‘less is more’ attitude.  There’s a couple of firsts for JC here as well, or at least in his recent body of work, and we have 2 scenes which should jump out at you, as in “JC can’t do that, it’s JC!”. You’ll know them when you see them and he should really be applauded for it.

Director Derek Yee certainly throws in some shocks, and not just the JC ones. There’s some very powerful visual displays of violence that pepper the film throughout, showing us that if you turn to the dark side you really will become slave to its master.  He also manages to get the best out of JC that we’ve seen in years.  Sadly though, there are some holes so large you could drive a truck through and it doesn’t quite hang together as well as it should. The ending is also inevitable as you follow the characters progression through the movie.  In saying all that though, it is still a great little film with the supporting cast, especially Daniel Wu, adding depth to the story.

So overall, what drives you to watch ‘Shinjuku Incident’ is Jackie Chan giving his best performance in years (which should be reason enough) and you could almost call this ‘Jackie Chan’s Rumble In Japan’.  I really did hover over a 3 out of 5, which is a way off 4, but on second viewing I appreciated the film a lot more. It’s not going to win a lot of awards but it is going to win a lot of hearts.  Jackie Chan is back, all be it for the time being, and in one hell of a ride.