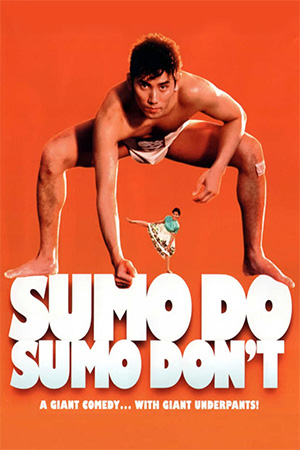 Although director Masayuki Suo’s reputation in the West was founded after the success of ‘Shall We Dance’ in Japan and overseas, his previous film, ‘Sumo Do, Sumo Don’t’, had already alerted Asian audiences to his obvious talents. Taking the idea of a disparate group of people and putting them into a very alien environment – a staple that Japanese cinema has often used successfully – is hardly original, but this proves to be much more than just a testing ground for the themes and ideas that would prove so popular in ‘Shall We Dance’.

Conscientious student Shusei is flabbergasted to learn that, despite his hard work throughout his college years, he is in danger of being failed by this tutor who claims to have never has seen him in class. This excuse proves to be little more than a way of blackmailing Shusei into temporarily joining the college’s ailing Sumo team. Reluctantly he agrees to make up the numbers and stop the Sumo also-rans getting thrown out of the championship due to lack of membership. After helping the pedantic Sumo coach to find a few more recruits for the squad – including a Rugby playing English student called Smiley – the conscripts go to the next tournament and are thoroughly humiliated by every other college they face. Shusei, despite having upheld his part of the dubious deal, vows to train with his new friends until they can face their rivals on equal footing. What follows is a Sumo summer camp where all of their quirks and weakness are put through the mill until they are not so lean, mean, wrestling machines.

Imbued with that understated eccentricity that many Japanese comedies have used so effectively, Masayuki Suo’s homage to his country’s unique culture proves to be a winning effort. The easy laughs that could be derived from the subject are milked as suspected, yet the director also builds his characters gradually as the story develops. It goes beyond the obvious clash of the incongruous and creates a blend where the humour works in tandem with a knowledge with what we have observed about the protagonists.

Director Masayuki Suo is careful to balance the comedy and pathos in such a careful way that the results never seem too self-consciously wacky or too reliant on clichéd emotional triggers. This ultimately gives Suo’s work a humanity that similarly themed efforts struggle to achieve. It also has an obvious respect for its cultural roots, looking with affection at Sumo while using the sport as an excellent platform with character-based comedy. Using the Western outsider as an observer of the ritual – his refusal to take off his tracksuit bottoms when in battle is used very humorously – opens out the more obscure reference points to the wider audience.

‘Sumo Do, Sumo Don’t’ is blessed with well-formed characterisations that unite expertly with the director’s vision. Shusei goes from hard-working to indolent to ambitious in such a natural way that some of the less-plausible transformations are made to appear quite forgiveable. Such an ordinary hero also off-sets the more eccentric characters, the hilariously traditional diarrhetic coach for example, and provides a balance that keeps the narrative on course. Elements as these, combined with a good screenplay and a director who is equally adept at deriving comedy from the mundane and the off-beat, make ‘Sumo Do, Sumo Don’t’ quite a special offering.