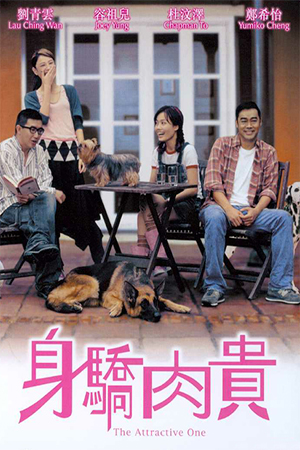 “My name is Andrew Saroch, I am 28 years old and I have a predilection towards buying mediocre rom-coms”. So goes the line I’ll use during the counselling sessions needed to help me purge myself of this strange obsession. Perhaps 2005 will see a cure for my needless waste of money, but until then we have ‘The Attractive One’, another attempt to make Lau Ching Wan into a romantic idol.

Hugo (Lau Ching Wan) – restaurant owner and eternal loser in love – returns home from a fruitless trip to Chiu Chow where his mother tried to play matchmaker unsuccessfully. On meeting up with his friend and chef (Chapman To), Hugo learns that a new stall has opened up on the market he has a keen interest in. The stall, a pet grooming service, is run by shy newcomer Yammie (Yung) who hopes to turn her unusual skills into a profitable business. Hugo quickly befriends her and even suggests that they combine their seemingly different trades, something that Yammie agrees to. As their joint venture to feed the masses while pampering their pets continues, Hugo learns of Yammie’s unrequited love for a doctor who saved her life while they were at school together. Even though the grumpy restaurant owner tries to help her, his real feelings remain hidden and the birth-mark on his face that has shattered his self-confidence prevents him from saying anything.

As with the blurb on the Universe DVD, I’ve managed to make the storyline to ‘The Attractive One’ sound far more appealing than it actually is. What could’ve been a tender examination on the nature of beauty is immediately sacrificed on the altar of pallid rom-coms. It initially seems that much will be made of Hugo’s large facial birth-mark, perhaps leading to the expected scenes that show why is a bruised character in an uncaring world. However, director Matt Chow decides to discard this idea almost immediately; the actual point of this character-trait and its complete lack of explanation is a good example of how uninspiring the whole affair becomes.

‘The Attractive One’ adds credence to the argument that directors of these pale rom-coms all follow some mysterious manual of clichés and conventions that must be given out at various film schools around the world. Tender piano music tinkles away in the vain attempt of igniting an emotion in the viewer as the director peppers the film with moments of ‘zany’ comedy and the good ol’ ‘rush to the airport’ ending. The characters are interchangeable with the scores of others who people Hong Kong rom-coms of the past ten years while the ever forgiving audience is expected to care about the loves of cardboard characters. While local audiences have tolerated such films in the past, the poor box-office showing of ‘The Attractive One’ might indicate that directors will have to be a little less complacent in the future.

The film tries to be a rom-com by affording 50% to each facet – past failures show how flawed this thinking is. In the past 18 months, two films have showed how a skilful balance of elements can produce something special: ‘Fantasia’ was predominantly a comedy and never tried to be anything else, managing to be far wittier than any film since; meanwhile ‘Turn Left, Turn Right’ was primarily a love story, but had enough moments of subtle mirth to lighten the mood. ‘The Attractive One’ has none of the qualities of these two, instead trying to please everyone while eventually just frustrating us all.

It’s hoped that Lau Ching Wan will return to form soon as anymore of these efforts might prove the death knell of his stellar reputation. After a year in which he’s appeared in such mediocrity as ‘Driving Ms. Wealthy’ and ‘Three Of A Kind’, Lau needs to find a role worthy of his on-screen charisma. Joey Yung, however, is another in the long line of Cantopop queens who are keen to be the next Sammi Cheng; judging by Cheng’s recent output, this isn’t such a noble goal. Yung works quite well with Lau, but there’s only so many of these superficial characters a viewer will be prepared to stomach in the future.

When the closing credits rolled, I opined that I had lost a full ninety minutes that would’ve been better used watching one of these sub-genres more accomplished works – not that there’s many to choose from. ‘The Attractive One’ is instantly forgettable while the money spent on it isn’t.