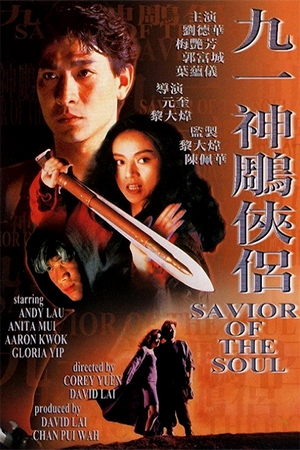 Sometimes a little imagination and invention can do wonders with a relatively small budget. Hong Kong film-making has often been a perfect showcase for this ethos with many cult classics and subsequently influential films being evidence of the skill of the director rather than the size of the production values. ‘Saviour Of The Soul’ is an excellent example of these cinematic virtues and has rightfully gained a huge following among filmgoers world-wide.

Andy Lau takes a lead role as a ‘City Warrior’ – a supremely gifted swordsman who defends futuristic Hong Kong from various villains. With him is a suave, gun-toting hero (Bee) and a dagger-wielding super-heroine, (Mui) who use their incredible skills to aid law enforcement. Spending considerable time together as a trio – with occasional interruption from Mui’s shrill twin sister – the two male heroes begin to fall in love with their fellow warrior. The past though catches up with Mui as a formidable fighter named Silver Fox (Kwok) comes looking to avenge his master at all costs. In a startling battle at the train station, Bee is killed defending Mui and Silver Fox escapes with a severe injury to his eye. Knowing that her presence means further trouble for Lau and Bee’s newly arrived young sister (Yip), Mui goes into hiding and attempts to protect those she loves from the wrath of Silver Fox. Having lost the woman he loves, Lau concentrates on his swordplay skills and looking after Yip who secretly has a crush on him; discreetly though he continues to look for her in every corner of the city and even disrupts a martial arts tournament to find her. When the young City Warrior finally finds his long lost love, his actions bring into being a final showdown as Silver Fox returns to kill those he left behind.

With a startling visual style and innovative action aplenty, ‘Saviour Of The Soul’ ranks among the very best of the Hong Kong fantasy genre. Each frame of this production is filled with sharp, eye-catching colours that give the whole film the unique texture of a larger-than-life comic book and makes sure that this is a cut above the average action film. It’s refreshing to see stars such as Andy Lau, Aaron Kwok and Anita Mui combine efforts and also break out of their usual character roles; Lau in particular seems to relish the chance to appear in such an off-the-wall production and enjoy mixing comedy and fight action. Although the action is performed by a non-martial arts skilled cast, action-choreographer Yuen Tak makes sure that everyone involved is made to look as impressive as in any of their other films. The final battle between Andy Lau and Aaron Kwok stands as obvious proof of this. What has caught the eye of many newcomers to Hong Kong cinema – aside from the exciting fight action – is the well-designed special effects that give clear indication of what can be done on a smaller budget. Every dollar of the budget has been poured onto the screen and fully utilised.

For those who are not familiar with Hong Kong cinema’s fondness for broad comedy alongside their action, certain elements of ‘Saviour Of The Soul’ may seem jarring or inappropriate. Some moments start out firmly as action orientated ones and then suddenly turn into comedy, but this is not particularly unusual for a Hong Kong film and the comedy is quite effective. If you’ve yet to see this 90’s cult classic film be sure to catch it at the next opportunity. Although it just misses out on full marks, it is still an undeniable must-see film for all action film fans.