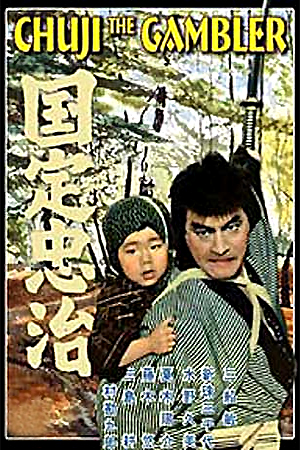 Former samurai Chuji returns to his home town after years away, his two loyal friends by his side also keen to see their respective families. Despite giving their last provisions to some starving villagers they meet on the way, the three are treated as pariahs in their own territory due to the years they spent gambling and constant evasion of the law. Chuji discovers, to his horror, that his family residence is now a dilapidated shell with only his sister scraping together an existence within. The troubled fugitive learns that his sister has been sent insane after being attacked by the corrupt magistrate Jubei who has also confiscated the vital rice supplies of the village. Along with his faithful allies, Chuji goes to Jubei’s stronghold to seek revenge for the assault on his sister. The ensuing battle ends in victory and, even though the evil magistrate escapes, the rice supplies are liberated and passed on to the lowly farmers. Chuji now has an even larger price on his head and flees to the mountains with an enlarged band of justice-seeking cohorts, helping the under-privileged wherever they reside.

The story of Chuji the anti-hero stirred by his righteous indignantion to right wrongs has obvious parallels to Robin Hood. He robs the rich to give to the poor and, despite his military education, accepts his life as a bandit in order to fight the corrupt society around him. The concept has been borrowed time and again throughout literature and cinema, each nation having a slightly different spin on the popular conceit. Japan’s essentially honourable ronin Chuji is a familiar, yet captivating character.

Senkichi Taniguchi’s version of the Chuji legend is often seen as the definitive work on the subject. With the masterful Toshiro Mifune taking the leading role, it would be easy to suggest that its star is the sole reason for its success. Yet ‘Chuji The Gambler’ is a superb marriage of a director’s craft and an actor with a transcendent charisma that seeps off the screen. Together they create a fascinating production bathed in early Toho colour, atmospheric lighting and intricate set design. Each facet means that the mise-en-scene is exquisite and dove-tails perfectly with a superbly executed narrative.

Toshiro Mifune is, of course, a magnificent, brooding Chuji, full of understated rage and quiet reflection. It’s almost a cliche to applaud one of Japan’s greatest ever actors in such a way, but Mifune undoubtedly dominates the screen with his deportment. Assisted by Taniguchi, Toshiro is given a few outstanding moment to further enhance his reputation as a screen legend. One perfectly executed scene that can rightfully consider itself on par with Kurosawa’s more illustrious works is Chuji tension-filled return to town to see the local barber; witty and exciting, this culminates in a superbly imagined showdown between hero and the villainous hordes. Not all of ‘Chuji The Gambler’ is quite so exhilirating, but when it’s good – and it often is – it’s very hard to fault.