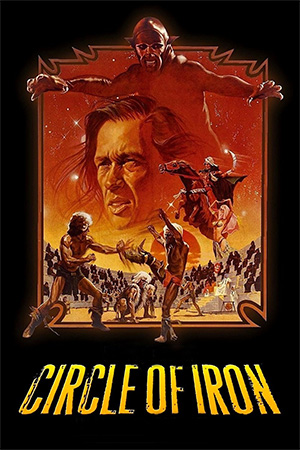 ‘Circle Of Iron’ is based on a story that was written by Bruce Lee, James Coburn and Stirling Silliphant entitled ‘The Silent Flute’, and was supposed to be the breakout vehicle for Lee’s international career. Sadly the project never came to fruition and after Lee’s untimely passing, actor David Carradine eventually picked up the rights. After several sections of the script were rewritten to give it a more comedic edge, Carradine once again chose to take on a role that was originally intended for Bruce Lee.

When young martial artist, Cord The Seeker (Cooper) loses a competition which will give him the right to fight the great wizard Zetan who guards the book of all knowledge, he decides to ignore the warnings and take on the quest anyway. Along the way, he will have to undertake several strange tasks that will be thrown at him by both allies and enemies, and will test his brains as well as brawn. Thankfully, he encounters a blind shepherd (Carradine) who is not only filled with knowledge about the journey, but he is also a very capable fighter. Cord decides to learn from the man who be believes could possess the wisdom that will enable him to complete his quest.

Although the essential idea behind ‘Circle Of Iron’ was that it would be a lesson in Eastern philosophy and the martial arts, it’s clear that the finished product is far from being what Lee had originally envisioned. Instead, this is more of a fantasy adventure that is closer to the likes of ‘Conan The Barbarian’ than the teachings of the Buddha. However this is not necessarily a bad thing as the film exhibits that kitsch entertainment value that infused Hollywood action cinema from the 70s and 80s, as well as boasting a strong leading performance from David Carradine (impressively filling four roles) and some beautifully shot scenery in a number of lavish desert locations.

Much like the story, the action in ‘Circle Of Iron’ is certainly a step down from what it could of been if Bruce Lee had been on board. Whilst I have always found Carradine to be an entertaining actor, his skills in the martial arts (which he didn’t start learning until after he took the role in ‘Kung Fu’) have never exactly set the world on fire. If you’ve ever seen him in action before, you will know exactly what to expect here as he exhibits quite sedate movements and doesn’t appear to have much physical dexterity. Likewise, the majority of other actors demonstrate very few legitimate skills in the martial arts and when combined with the poor editing, this makes for a number of very amateurish looking fight scenes.

It may not be quite as thrilling a prospect as it could of been with Bruce Lee in the leading role, but ‘Circle Of Iron’ still retains a number of likeable qualities. If you are fan of David Carradine or are after a slice of nostalgia that is akin to the likes of ‘Kung Fu’, then ‘Circle Of Iron’ certainly hits all of the right notes.