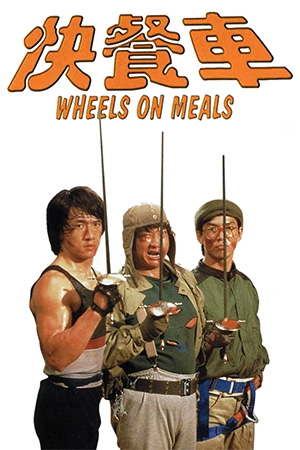 Following on from the success of the 3 brothers in ‘Project A’, Sammo Hung directed this action comedy in an unusual place for a HK action comedy; Spain. Lola Forner made her first appearance in a Jackie Chan flick and was apparently there because she was the only European actress they knew! It is worth noting that the proposed sequel to ‘Operation Condor’ may well see a return of Miss Forner to reprise her role from the original ‘Armour of God’.

‘Wheels on Meals’ sees Sammo playing a private detective hired to find Miss Forner, who unwittingly finds herself in the care of fast-food merchants Jackie and Biao. The Spanish setting allows for some beautiful vistas not possible in Hong Kong, although there seems to be a rather large contingent of Chinese in Spain at the time without any explanation!

Benny “the Jet” and Keith Vitale were brought in as the then fashionable Gwailo villains, and at the time provided Jackie and co with some still unsurpassed fights courtesy of Sammo Hung’s breakthrough choreography. Jackie has never looked better in a one-on-one fight, and while the story is barely memorable, it is still another excellent addition to Hung’s filmmaking resume.

A little endnote of interest; this film also had more than a passing influence on the JC classic ‘Armour of God’, not only for the inclusion of Lola Forner, but also for stealing some of the vehicle stunts and panoramic views almost shot for shot.