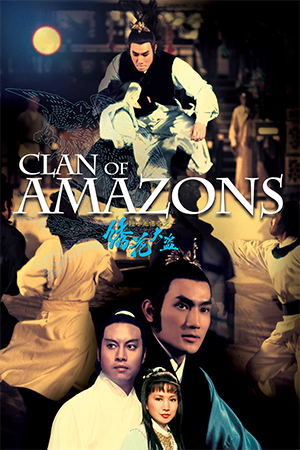 Although most collaborations between Chor Yuen and Gu Long would normally be associated with either Ti Lung or Yueh Hua as star, here Lau Wing steps into the lead role. Making his name in the Shaw Brothers’ ‘Emperor Chien Lung’ film series, Lau has never been considered one of the significant figures of the Jade Screen. However, ‘Clan Of Amazons’ gave him the perfect opportunity to hone his leading man status under the careful control of Chor Yuen.

The martial world is plunged into terror when the ‘Embroidery Bandit’ starts to attack convoys of precious materials. The bandit not only wounds the victims, but also leaves a piece of embroidered silk as a calling card, though their identity continues to baffle everyone. The frightened clans decide to call on the expertise of Lu Xiaofeng (Lau Wing), the inquisitive fighter cum detective. After agreeing to the challenge, Lu links up with an old friend from another clan (Ching Li) and the two set out to reveal the identity of the dreaded bandit. Along the way they tussle with an all-female clan of ‘Robin Hood-esque’ fighters and a plethora of other weird and wonderful figures.

When the collaborations between Chor Yuen and Gu Long work well, the complexities of the storyline and the intrigues therein become absorbing and interesting. Unfortunately, when the twists and turns become too preposterous and too prevalent, the enjoyment of the entire production is hindered (see ‘Swordsman And The Enchantress’ as proof) despite the abilities of Chor Yuen. It is therefore a pleasure to report that ‘Clan Of Amazons’ finds the team on top form, weaving together an interesting narrative with a few excellent characters. The success of the film is in its combination of Chor Yuen’s exemplary direction (not to mention the sumptuous art direction that is to be expected of a Chor Yuen film), one of Gu Long’s better stories and a cast of performers who really shine.

As Lu Xiaofeng, Lau Wing is a superbly dominant figure within the narrative and becomes the film’s significant focal point. A magnetic leading character is essential to any aspiring classic and ‘Clan Of Amazons’ has a particularly likeable one in Lu. A mixture of detective and wise-cracking hero, Lu exudes a swaggering charm that makes him the perfect character for the audience’s sympathy. Much of this is due to Lau Wing who gives one of the best performances of his career, showing enough skill to banish away fears of Ti Lung or Yueh Hua’s absence as leading man. Chor Yuen also calls on the services of one of his favourite leading ladies, Ching Li, and she is as assured as ever, becoming a fine companion for Lau Wing’s hero.

‘Clan Of Amazons’ also features some above average action set-pieces, utilising the usual swordplay antics with a few nifty scenes of unarmed combat. The skill of any production of this nature is the fact that such choreography works successfully in tandem with the storyline; Chor Yuen’s is eager not to let either department suffer in behalf of the other and achieves an enviable balance between them. ‘Clan Of Amazons’ is an elegant swordplay film that shows how entertaining the genre can be when the various components are properly blended. It is, needless to say, recommended to all fans of Chor Yuen’s work and even those new to the genre may find much to savour.