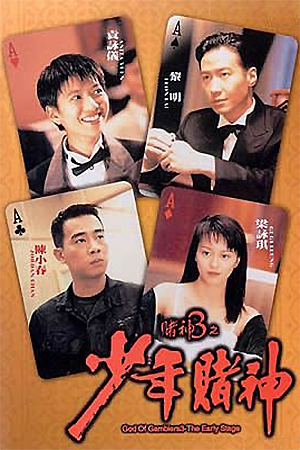 As a child, Ko Chun (Lai) is heavily involved with watching his Auntie gambling with street vendors.  When an attempted con takes place, Chun is rescued from being seriously hurt by a small girl who takes the injury for him, forming a bond between the two.  Years pass and we learn that Chun’s parents were killed and he is taken into care by a mysterious gambling shark.  He trains Chun and two others in the art of card trickery with the aim of eventually getting one of them to win the title of ‘God Of Gamblers’ as well as a large percentage in all casinos.  During the competition, Chun is wounded and loses the title to his own adopted brother.  Now his childhood friend, known as Sister Seven (Yuen), must try to help Chun recover and win back what should rightly be his.

Rather than being just another sequel, ‘God Of Gamblers 3’ (not to be confused with Stephen Chow’s ‘God Of Gamblers III’) is in fact a prequel to the original ‘God Of Gamblers’. Leon Lai takes over the role of Ko Chun, mainly thanks to his eye-catching cameo in ‘City Hunter’, and the idea is to explain away all of his abilities. Unfortunately though, the whole affair is more of a rehash than an original outing, with several events and accidents bizarrely happening to Ko Chun all over again. There’s also a distinct lack of actual exploration into the character, with only his quirky habits being given any back story. Sadly these are all explained in painstaking detail, meaning a lot of the original mysticism is completely lost.

Leon Lai may have looked super cool playing a similar character in ‘City Hunter’, but a lot of that charm seems to be lost here.  This is not entirely his fault though, as you can clearly see that his instructions were simply to copy Chow Yun-Fat. Of course, we all know that Lai is no Yun-Fat and his performance just comes across as bland and lifeless for the majority of the movie. This isn’t helped by the fact that most of the supporting cast are utterly wasted, either being confined to Wong Jing comedy hell or just expected to act tough. Jordan Chan is about the only real plus, playing what I assume is intended to be an early version of Dragon, originally played by Charles Heung.  He gets the majority of the action scenes and is made to look pretty impressive, although the choreography is somewhat lacking and rarely finds that final gear-shift into overdrive.

The idea behind ‘God Of Gamblers 3’ was an interesting one, but sadly the execution is distinctly lacking. The film has neither the charm or magic of the original ‘God Of Gamblers’ and fails to competently put together a back story that is worthy of its hero.