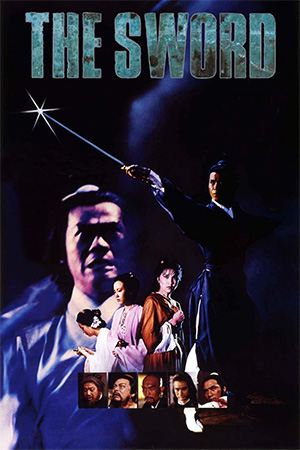 With the dawning of the new-wave of Hong Kong cinema in the early 80s, a few films stood out as a defining moments during the period. One of these illustrious productions was Patrick Tam’s ‘The Sword’ – a re-telling of a popular story, but with the stylistic touches of the new school of film-makers.

When a master swordsman observes how his own blade is destined to bring misery and bloodshed to all who come in contact with it, he decides to fully exclude himself from the pressures of the martial world. His reputation, though, will not allow that great warrior to rest and soon an honourable young swordsman (Cheng) looks to challenge the legendary fighter. However, this new challenger has his own battles to face as the partner (Keung) of his old girlfriend decides to erase him from the scene. Alongside this evil objective is his twin desire to own the fabled sword and take over the rulership of the martial world. With this in mind, he sends out his vicious minion (Ko) to help complete both tasks. The prophetic tragedy that had surrounded the sword continues to effect all three of these very different men and especially the women they love.

‘The Sword’ is a stylish swordplay film with an ominous air of fatalism filling the atmosphere. From the opening pre-credit prophecies, the viewer is well aware that the characters are certain to face trauma throughout the storyline. By the time the final credits roll, every single character has been touched by tragedy – some more serious than others. During a period where comedy punctuated every kung-fu flick of the time, director Patrick Tam creates a very sombre martial arts drama and never allows the tension to drop. With a cast that ranges from television star and cinematic newcomer Adam Cheng to genre favourites Tsui Siu Keung and Eddie Ko, ‘The Sword’ is packed with quality. Cheng is excellent as the naive hero whose actions have powerful consequences while veteran actor Tien Feng is assured as the weary master. The combination of director and cast manages to conjure up a dramatic success that also pleases with its action choreography. The various sword duels are designed in such a way that they take in influences from swordplay classics such as ‘One Armed Swordsman’ all the way to Japanese Chambara masterpieces. All of these are superbly delivered. The visual style that Patrick Tam designs is another indication that this is a more mature action film than may be expected. All things considered, ‘The Sword’ is a highly recommended new-wave effort that pleases in every department.