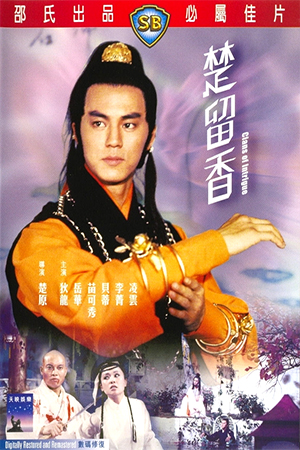 Though many directors have tackled the complex world created by writer Gu Lung, few have fleshed it out with the kind of panache that Chor Yuen brought to the task. Combining a keen eye for visual magnificence with an ability to turn potentially convoluted storylines into engrossing film-making, Yuan’s way of bringing the clandestine swordplay world to the screen has always been watchable at the very least. ‘Clans Of Intrigue’ once again utilises the Gu Lung staples of fantasmagoria and intrigue, but this time focuses on a martial arts ‘whodunit’ rather than the usual clan warring.

When influential figures of the martial world are found poisoned by a stealthy killer, there is naturally considerable worry among the many clans. Further inspection reveals that the victims were unwitting recipients of the ‘Magic Water’ of the highly secretive Magic Temple sect. One of the leading warriors of the sect corners master thief Chu Liu Hsiang (Ti Lung) and accuses him of entering the temple and stealing the fabled waters – Chu being one of the few men who could reasonably have the skills to do it. Chu obviously pleads his innocence and is given a short period of time to clear his name and capture the real killer. Starting his investigations among the various rivals in the martial world, Chu finds himself hunted by the many enraged swordsmen who believe him to be the real murderer. Chu uses his abilities more than once to escape his would-be attackers and gradually begins to piece together an extravagant plot that has long remained hidden by its participants. As the identities of the numerous suspects begin to be confused, Chu realises that he cannot trust anyone and that he must rely on his own wits to get the answers he needs. The uncovering of the real killer, alongside the revelations of the people he has met on his investigations, leaves Chu with a battle against the odds to survive and prove his innocence.

Describing this as a mixture of swordplay drama and Agatha Christie thriller may sound crass, but it proves to be quite an apt description of ‘Clans Of Intrigue’. Obviously not all of the ‘whodunnit’ conventions are on offer here, but there is enough concentration on the expected investigation sub-plot to ensure that this is an intentional mixture of these very different genres. While the usual ‘whodunnit’ stories do retain some realism for their framework, Gu Lung’s work revels in the surreal elements of the set-up and throws a multitude of weird and wonderful characters into the fray. This is again the main aspect of the film that may frustrate potential viewers; Chor Yuen doesn’t attempt to explain every plot strand and labyrinthine detail, nor does he make excuses for their incredulity. Even for veteran viewers, the production can still be baffling and, when the narrative begins to get convoluted, becomes a test of concentration. As motives become cloudy and double-crosses happen in nearly every frame, it can be easy to get lost in the intrigue and begin to lose interest. The finale in particular loses excitement because of the endless sub-plots and histories that get introduced.

‘Clans Of Intrigue’ is hard work, but it is fairly easy to get sucked into its baffling world. As was said, Chor Yuen fills every frame with a sharp visual power that often makes the film a pleasure to watch despite its faults. Ti Lung is again excellent in another heroic role that absorbs all of the charms and eccentricities that Gu Lung’s protagonists often enjoy. He is equally at home with his slightly more light-hearted character here than he was with the sterner hero of ‘The Magic Blade’. With such a strong supporting cast adding significant weight to Ti Lung’s central performance, ‘Clans Of Intrigue’ is still a production of definite quality despite its faults. However challenging – and at times frustrating – this swordplay drama is, there’s nonetheless enough reasons to stay watching and endure to the conclusion.