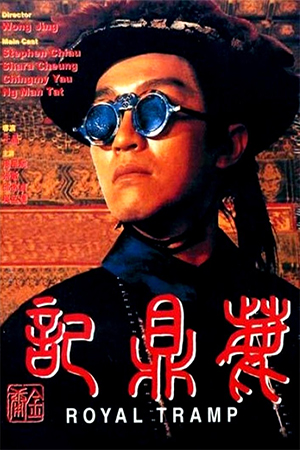 Taking the well-known stories of ‘The Duke Of Mount Deer’, Chow Sing Chi once again exercised his Midas touch to notch up over HK$40 million with his own version. A sequel also followed the same year and managed to amass a very respectable total at the local box-office. With familiar Chow helmer Wong Jing taking the directorial duties, ‘Royal Tramp’ proves to be deserving of its financial success and a thoroughly agreeable action comedy. More about the good and the bad later though.

Wei Shew Bao (Chow) is the cowardly teller of tall tales who wows and annoys local visitors in equal measure. Although he speaks of grandiose deeds and colourful characters, the simple fact is that his own life is devoid of adventure. All of this changes when Wei saves the leader of the anti-Ching movement during a furious battle. Rewarding this strangely heroic act, the chief adopts Wei as his pupil and immediately assigns him the task of infiltrating the palace to find the ’42 Chapter Classic’. Once in the palace, the fearful and reluctant hero is forced to become the underling of powerful eunuch Lord Hai (Ng Man Tat). Now with a second master, Wei is given a second mission – to break into the Queen Mother’s palace and get the same book, but give it to Hai. While carrying out his double assignment he befriends a brother and sister team who are within the palace grounds; what Wei doesn’t know is that this pair are in fact the young Emperor and his sister. As with so many others, the Emperor and especially his sister take a shine to this hapless thief and help him out of a few scrapes. When Wei does discover who his new friends really are, he finds that he now has a third master who also gives him a fearsome task to complete. Into this intrigue comes the mutual enemy, Ao-Bye, the all-powerful general who seeks to rule the kingdom for himself. Therefore Wei must play all sides off against each other to ensure his own survival and the eventual completion of his missions.

As is very obvious from this relatively brief synopsis, ‘Royal Tramp’ is complicated to the point of distraction. With so many characters and so much duplicity, it’s only natural that the film becomes convoluted at times. Thankfully, although it isn’t perfect, it is still an admirable attempt to combine the source material of ‘The Duke Of Mount Deer’ with the redoubtable talent of Chow Sing Chi. There’s something very appealing about seeing this cowardly innocent caught up in palace politics and Chow plays the part perfectly. His completely hopeless, yet ultimately successful manner works well in the straight-faced world of the swordplay film. Instead of relying on the incredible feats of power that his contemporaries utilise, Chow’s character is totally reliant on fortunate circumstances – something that the audience can appreciate.

On the down side, director Wong Jing occasionally lets his typically over-the-top style get the better of the film. This means that the viewer happily gets swept into the mood and atmosphere of this crazed world, then the pace grinds to a halt while the cast ham things up mercilessly. Obviously Chow Sing Chi is a comedy actor first and foremost, but his funniest moments are often his most restrained. These over-the-top scenes also hinder the coherence of the already complicated plot and make sure that things never run at the speed that they should have.

‘Royal Tramp’ is still a very good example of Stephen Chow playing to his strengths. Added to the humour is the furious action orchestrated by Ching Siu-Tung that makes this much more than the average comedy film. Therefore this is, for the most part, a polished production that is by turns funny, exciting and baffling. Recommended.