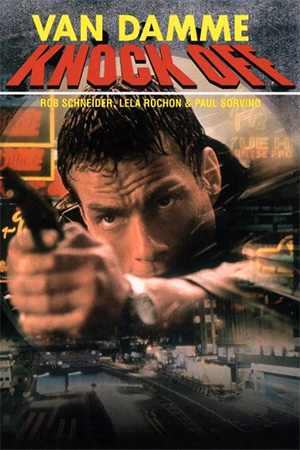 For me, Tsui Hark has always been one of the most frustrating Hong Kong directors. Not because of a lack of talent but more due to his inconsistencies.  One moment he is responsible for creating a genre-defining classic, such as ‘Once Upon A Time In China’ or ‘Zu: Warriors From The Magic Mountain’, and then all of a sudden he will take two steps backwards and produce a bland and incompetent action film like ‘Black Mask 2’.  So far, his American ventures have been of the latter variety but could ‘Knock Off’ be the exception?

Marcus Ray (Van Damme) and his partner Tommy (Schneider) are the kings of the “knock off” clothing industry in Hong Kong.  When one of their shipments to the U.S. is identified as counterfeit, they suddenly find themselves at the centre of a Russian mafia plot to hold the United States’ security for ransom.  As it turns out, the mafia are using their clothing lines to implant tiny micro-bombs that will eventually be distributed throughout the States, allowing the Russians to have them at their mercy.  With the CIA powerless to infiltrate the smuggling ring, they turn to Ray and Tommy to assist them in the case even though they are hardly the most reliable pair.  However, as things start to explode around them, Tommy and Ray find themselves fighting for their lives and hoping that they won’t end up being “knocked off” for real!

Unfortunately for Tsui Hark fans, ‘Knock Off’ displays all the attributes that sum up his darker side.  For starters, the subject matter of counterfeit clothing is a bizarre and somewhat uninteresting choice, but it is one that becomes totally ridiculous when placed in these outlandish scenarios.  This is not helped by the almost non-existent scripting and farcical characters that fail to provide the film with the necessary substance.  Van Damme adds insult to injury by putting in an arrogant and smug performance while America’s answer to Dean Shek, Rob Schneider is nothing but irritating throughout.

As is often the case with Hong Kong movie directors, Hark does manage to redeem himself with the action sequences. Despite the bizarre decision to shoot each scene differently, there’s quite a bit of tension and excitement in the gunplay and Van Damme looks very good during the hand-to-hand combat. There is of course, a heavy reliance on stunt doubles for the more acrobatic manoeuvres but it never detracts and always looks convincing. The one big disappointment however, is the obvious lack of any significant opponents or big bosses for Van Damme to fight. Even though the finale does feature some interesting choreography, there is no closing duel and you are left feeling somewhat underwhelmed by it all.

It’s extremely easy to see why ‘Knock Off’ was a failure for both star and director; there’s nothing original here and little that hasn’t been done better elsewhere.  Hark needs to re-evaluate his Hollywood action movie ideas before he will become successful in America as thus far, he has only produced films that are probably more suited to a television market. A shame really, as we all know he is capable of so much more.