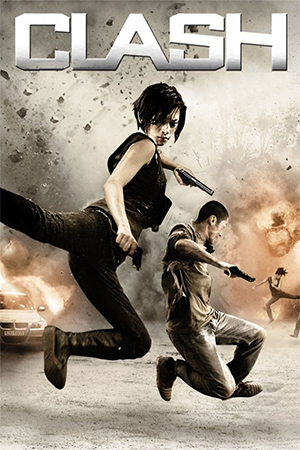 With a title like ‘Clash’, this film could have done with a few more of the said confrontations to make it the full on fight film the title suggests. There are certainly several superior fight clashes but not enough to pull the film out of over familiarity and soap opera theatrics. Wicked high-kicker Johnny Nguyen (‘Warrior King’, ‘The Rebel’) produces, writes and action choreographs and certainly tries hard to deliver a gritty action film, and while he succeeds on occasion, he’s let down by a film that spends way too much time on a silly villain and on too much melodrama in-between the impressive fight scenes. Thanh Van Ngo certainly cuts a fine figure and is imposing in the fight sequences but the narrative hook of her doing one last job for the evil pimp/gang boss who is holding her daughter hostage is simply a case of been there, seen it all before.

Said pimp/gang boss simply isn’t threatening enough (though does bust a few decent moves in the fight finale) prattles on in a pretentious manner about everything being like a chess game (or something!) and isn’t helped by every scene he is in being backed with the most awful and intrusive classical/opera music: see, he is a classy villain as he likes respectable music and has some ridiculous metaphor or story to go with every situation (yawn)! There is also a mysterious briefcase our team must recover (yawn!), the two leads end up falling for each other (yawn!) and they is way too much pontificating when momentum and tension should be being built (yawn!). The whole set up is predictable and nothing you probably haven’t seen a billion times before.

However, what ‘Clash’ does have going for it is its two leads who excel in the fight scenes which have a refreshingly down and dirty vibe to them. You only have to watch Warrior King to know Nguyen can fight and Ngo ain’t no slouch either, the pair of them high kicking it through several brutal confrontations. The fight sequences are unflashy and devoid of any wire enhancement but do feature crisp choreography and performers skilfully demonstrating what they can do. In fact, on occasion the fights are so full on it almost appears as if the fighters are improvising and really going at it, not least in a showstopper scene where Nguyen and Ngo take on a group of ferocious French gangsters. The other thing the film has going for it is Thanh Van Ngo. Not only can she fight but she is also a fine figure of a woman, not least in a scene that has her wear a rather revealing red dress and tango with Mr Nguyen. Brutal and beautiful, she all but owns the film and doesn’t even flinch when she takes a beer bottle to her head: awesome!

‘Clash’, while not the full on action film it could have been, still provides enough low-rent thrills for the less judgemental fight fan; it’s just a pity about all the dull bits in-between the action.