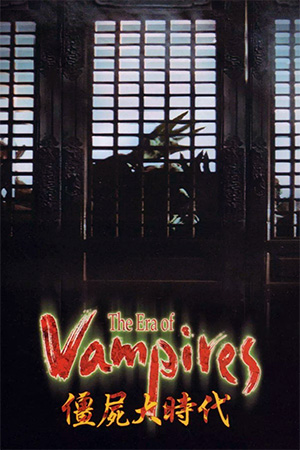 Master Mao Shan (Ji Chun Hua) and his understudies Thunder (Ken Chang), Rain (Michael Chow), Wind (Lam Suet) and Lightning (Chan Kwok Kwan) are chasing the King Vampire. But after their pursuit ends in initial failure, the understudies find themselves separated from their master. While searching for the King Vampire and Master Mao Shan, they stumble upon a wedding party at the Jiang household and sell their services as servants. Young Master Jiang (Wang Zhen Lin) who has already been made a widower on no less than six occasions is getting married to Sasa (Anya). However this time it is the Young Master who dies after the aforementioned wedding from a poisonous snake bite. Sasa however is merely on a mission on the behalf of her brother Dragon Tang (Horace Lee Wai Shing), who wishes to possess the hidden fortune of the Jiang household to pay off his gambling debts. Soon Master Jiang (Yu Rong Kwong), who has a macabre penchant for preserving his dead relatives in wax, becomes increasingly paranoid that everyone in sight is after his wealth. Dragon Tang then hires a Zombie Wrangler (Chen Kwan Tai) to stir the preserved corpses in the Jiang household so as to create a diversion. The King Vampire then makes his presence felt and Sasa, whom Thunder has become smitten with, is injured in the scuffle and risks becoming a vampire before seven days have elapsed.

‘The Era Of Vampires’ is a narrative disaster as it seems to lack any cohesive structure. I can only assume that much footage was edited out as all the characters remain relatively undeveloped, in particular our four primary heroes. Half the film has already elapsed before it becomes apparent which one of the four is to become the pivotal hero. As a result the audience fails to successfully identify with him. Incidentally the other three heroes then vanish for a large section of the film.

One area ‘The Era Of Vampires’ succeeds in is the action sequences. These are well constructed and serve as a reminder of the standard of action that was a staple of the wuxia films of the early 90’s. Even if they are relatively short. That is until the final showdown where quality choreography is forsaken in favour of a special effects bonanza, which highlights another problem with the film. On the surface ‘The Era Of Vampires’ looks more expensive than say for example, the ‘Mr. Vampire’ series. However not only are we subject to very poor digital effects, but horrendous physical effects as well. The physical effects in the ‘Mr. Vampire’ series look far superior despite being nearly twenty years older. In particular the effects concerning the King Vampire are truly appalling. Surely it would have been better to forgo expensive (not to mention dodgy in this instance) digital effects and invest in better physical effects instead? The result is a tedious final reel involving characters we don’t really care all that much for because there has been no apparent effort to adequately develop them.

It is difficult to speculate as to whether a lot of footage was cut on the part of the distributors, or if it is just a case of sloppy editing and/or general film making. But whatever the reason, ‘The Era Of Vampires’ fails to capitalise on a concept that could have turned out to be a solid film given enough care. It does raise interest from time to time but is unable to sustain that interest.