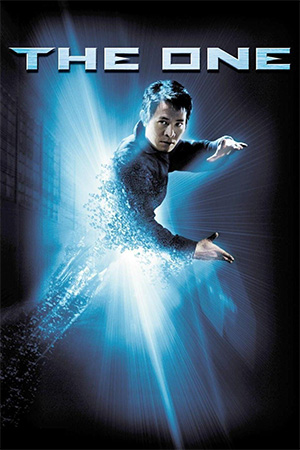 While the premise of alternate identities is not an original one, it is an idea which has proven popular in Hollywood for decades. Jean Claude Van Damme’s ‘Double Impact’ proving the best known amongst action fans. ‘The One’ tries to add a fresh dimension to the old adage, and was originally formulated as a starring vehicle for WWF’s The Rock before he committed himself to ‘The Scorpion King’; a ‘Mummy’ spin-off.

While not a conventional martial arts actioner in the usual Jet Li style, it is refreshing to see Jet in another different role. He still plays a cop, as in a dozen other films, but this is certainly more “Hollywood”, and as such, will appeal to a different audience, even if it alienates some of his hardcore fan base. The plot is paper thin, with little characterisation taking place in the short running time. In its place are a number of special effects set pieces and action clichés leading up to the ultimate showdown: Good Jet versus Bad Jet. A mouth-watering prospect!

To be fair, the finale is excellent – a pure adrenaline rush, combining innovative choreography and state of the art special effects. What will please many is the length of the fight scene, which shows how the Americans can just as happily sit through a ten-minute fight as a two-minute one, if it is tackled in a way that suits them. Prior to this, all action sequences seem to be over before they begin, but are suitably impressive, and the camerawork and slow motion actually enhance Jet’s moves for a change.

All in all, one for the mainstream family, and I can’t help feeling that this version of the film is so much better than it would have been had The Rock been available. As a result, Jet should be applauded, but he still remains an unknown quantity in the Hollywood market, as many producers still don’t know how best to use him. I hope his truly breakthrough role comes sooner rather than later, as he isn’t getting any younger, and who knows how long this Western ‘Hong Kong’ obsession will last.