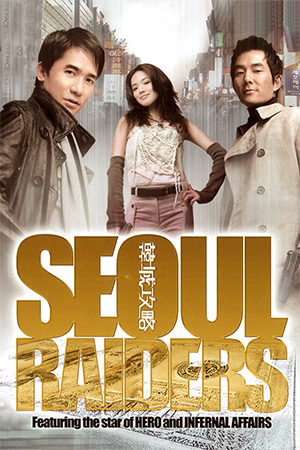 Female thief JJ (Qi) breaks into a guarded office building to steal a pair of highly coverted plates used for printing U.S. dollars. However, suave private detective and self-proclaimed mercenary Lam (Tony Leung Chiu Wai) is already on the scene and is just in the process of blowing up the safe when she arrives. After the ensuing altercation with the guards and having managed to give JJ the slip, Lam makes his way to the U.S. Embassy to claim his sizeable reward. Unfortunately things do not go to plan and the plates are stolen from Lam by Embassy worker Owen who then flees to Korea to find a buyer. While interest in the plates is expressed by a number of parties, Owen agrees to sell them to Korean kingpin ‘Polar Bear’ though neither one if them fully trusts the other. Meanwhile Lam is hot on the trail, backed up by his shapely assistants and utilising his knack of being one step ahead of those he chases. Lam and Owen clash on more than one occasion, but there is more to each man than the other is aware of.

With Jingle Ma’s name lacking the commercial lustre it once garnered, it’s little surprise to see the former cinematographer returning to one of his biggest hits for inspiration. ‘Tokyo Raiders’ was a breezy experience with an exotic location, a fine cast and an enticing mixture of comedy and passable action. ‘Seoul Raiders’, sadly, is like a diluted version of the hugely successful original, taking very similar set-pieces and ideas, then squeezing the energy out of them until there is only a bland hint left. To see a film as anaemic as ‘Seoul Raiders’ coming out of an industry once lauded for its action cinema is an especially bitter pill to swallow.

‘Seoul Raiders’ has assets to call on. Tony Leung returns to a character who he clearly relishes playing; the supercilious, narcissistic Lam is different enough from the characters who usually populate the genre to make him a welcome sight. Richie Ren (or Richie Jen as he apparently now prefers) is another actor who, while not of Leung’s calibre, has a screen appeal that is consistently improving. Recent films have seen Ren exploring slightly different roles, but he always retains that cheery disposition. ‘Seoul Raiders’ gives him a flat character that is nigh on impossible to fully expand upon even though Ren performs admirably. The Seoul location is also a bonus, though cynics may argue it is an attempt to attach themselves to the currently thriving Korean cinema scene. Nonetheless, Jingle Ma gives his location a veneer of glamour and glitz, though the sweeping camera shots he used a decade ago are looking distinctly tired now. This ‘Tokyo Raiders’ sequel is not completely devoid of hope therefore.

The real deficiency in this glossy production is the vapid choreography and somnolent, almost apologetic action sequences. The countless fight scenes have an eerie similarity to an am-dram production of ‘Cats’, full of flailing legs, pointless somersaults and tiresome posturing. It’s about as far removed from the beloved glory days of Hong Kong action film-making as ‘Police Story’ is from ‘Fame’. It’s not even as if the absence of real on-screen fighters can be pin-pointed as the main cause; many other productions have used clever doubling and intelligent choreography to make even the stiffest actor look convincing. Reminiscent of Jingle Ma’s equally pale ‘Silver Hawk’, ‘Seoul Raiders’ turns potentially intriguing ‘one v. many’ confrontations into play-fights where our heroes and heroines repeat the same few moves against a group of very uninterested looking extras – hardly what Hong Kong cinema needs at this time.

As even the grandest Hong Kong production can never compete with the riches of the average Hollywood blockbuster, it would be expected that film-makers would try to utilise local skills to compete with their rivals. Hong Kong has a veritable excess of skilled action orchestrators, many of whom work on local television productions. Calling on their skills to ignite some kind of spark in the film’s most important department seems too obvious to a simple critic like me. Instead, ‘Seoul Raiders’ takes the aforementioned fight scenes and just recycles them move-for-move moments later with only the location changing. This repetition slowly dulls the senses. Only briefly are there moments that really seem to expand upon the promise inherent within the concept and location.

The partial redemption of ‘Seoul Raiders’ is the few moments of real chemistry between Tony Leung and Richie Ren. As stated earlier, both actors have enjoyed a fruitful past couple of years and ‘Seoul Raiders’ allows them to have fun with the material. Of course the fact that the lead actors do not take the film seriously does little to create real tension. However, far more problematic in this area is the notable absence of a real villain. There is never a feeling that our protagonists are in real danger and that there is any need to worry about their well-being. Naturally the lacklustre choreography is also detrimental to the atmosphere that good action films need to thrive.

‘Seoul Raiders’ is not only a disappointment in comparison to ‘Tokyo Raiders’, but also a worrying reminder of the recent lack of sparkle in Hong Kong action cinema. Films like ‘New Police Story’ and ‘Kung Fu Hustle’ showed that Eastern film-makers can still call on a collective imagination that still has no rival in the West. Unfortunately, ‘Seoul Raiders’ comes across like a second rate imitation of a Hollywood imitation of a production from Hong Kong’s glory days. Mildly diverting then, but as shallow as a toddler’s paddling pool.