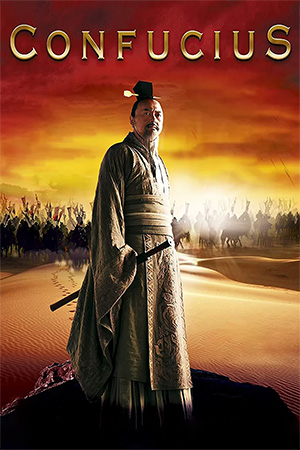 The life of the famous Chinese philosopher Confucius gets the big budget bio treatment in a film that certainly looks stunning and features a committed performance from the man Yun Fat but is unfortunately a lethargic slog through a great man’s life. Hu Mei’s film certainly means well and the visual design is often opulently executed proving that Zhang Yimou isn’t the only Eastern helmer who can craft a pretty picture. Unfortunately, the narrative and pace just can’t keep up with the visual beauty.

Things start of relatively well with Confucius using his wisely knowledge and gift for military strategy to help diffuse an impending war between three warring factions. We get to see a little of Confucius’s home life, his ever growing legion of committed disciples and how his words of wisdom and way of looking at life help to shape the Chinese people and in some cases save their lives. Yun Fat gives an impressive performance, quietly authoritative and a million miles away from the action cool roles that made him famous. Set design and cinematography are of a high standard helping to create an epic sweep but unfortunately the film just doesn’t engage as it should.

The makers perhaps try to fit too much and too many people in. Once Confucius is sent into exile and wanders the land teaching his philosophy the film becomes very episodic, almost like a quick rush through Confucius’s greatest hits. The film also always feels like its building to something that never really materialises. So many characters fleet in and out it’s hard to keep up with who is who and why they are there and what role they are playing. Subtitles appear every time a new character is introduced, explaining who they are but this really only adds to the confusion as many characters disappear as quickly as they appear. It seems we are being presented with a lot of information quickly in order to fit in as much about a period in Confucius’s life as possible.

So what starts off as quite interesting and engaging becomes progressively more disjointed meaning drama and characters suffer. As mentioned, the flick is well intended and there is a certain refreshment at a big budget Chinese epic not resorting to countless CGI enhanced battles (though there are a few short, sharp bursts of combat: this is no action epic) but ‘Confucius’ just unfortunately becomes more of a trudge through history than an insightful look into a historic figure’s life.