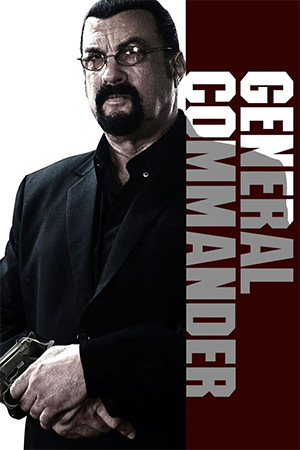 Jake Alexander (Steven Seagal) and his team of CIA agents are assigned a routine sting operation involving a human organ trafficker. Unfortunately, the operation quickly goes south resulting in the death of both the target and one of the team. Alexander wants revenge so he goes after the man rumoured to be at the top of the organisation – mob boss Orsini (Edoardo Costa). With the CIA unwilling to sanction a hit, Jake and his crew have no option but to go rogue and undertake their own mission of vengeance.

‘General Commander’ is billed as an action-packed spy thriller filled with intrigue, espionage and adventure. The sad reality however, is that ‘General Commander’ is a steaming pile of… well, you know what. After setting up the simple revenge plot with a laughably bad opening scene, it appears as though the film has absolutely nothing left to offer. There’s no attempt to flesh out the characters or provide any additional plot points, and instead it just kills time by jumping from one meaningless table confrontation to another. Presumably the director/s felt that the constant boasts about exotic locales and close-ups of various cleavages would be enough of a distraction, but I can assure you that they aren’t. The whole affair is just a mind-numbingly dull slog that is made all the worse by the dire performances. This is particularly applicable to Seagal who lazily mumbles his way through all of the weak dialogue and rarely seems willing to move out of his chair.

If you were hoping to see some action, you’re also in for a disappointment. ‘General Commander’ only really has four main action sequences to speak of and calling them “action” is generous. The opening shootout is brief to say the least and the only real positive that I can muster is that it has some average looking blood splatters. After that, we get nothing until around the halfway mark when Seagal takes on Ron Smoorenburg, who pops up for a 2 minute cameo. Unsurprisingly, it’s a short-lived Seagal slapfest which only showcases a couple of arm twists before it all ends with one giant bitch slap. The other two action scenes are split up across the finale, and they’re equally embarrassing. The camera is all over the place as our “highly trained” team fumble through another attempt to take down the big boss. The effects are bad, the slow motion is bad, the acting is bad, the deaths are bad… basically, it’s all bad. Then we have a very short knife fight as Seagal goes mano-a-mano with the main villain. It’s really not much of a fight though, as they both just slash at each other a few times before Seagal clearly runs out of steam and strikes the final blow.

It’s hard to imagine anyone enjoying ‘General Commander’ as it’s such a sorry excuse for an action movie with no real positives to offer. It baffles me that the filmmakers expect audiences to swallow this crap and I doubt even die hard Steven Seagal fans will find anything to appreciate.