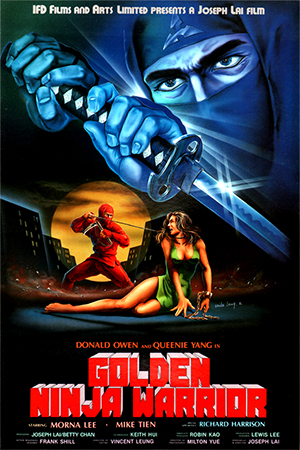 When Sherri (Yeung Huei-Chie) learns that the underworld kingpins Eagle Lam and Eric Tan murdered her father, she travels to Hong Kong in search of vengeance. By going undercover, she is able to infiltrate the organisation and begins to dismantle it from the inside. Meanwhile, Sherri’s old training partner Michael (Owen) has been put in charge of escorting the Golden Ninja Statuette to a ceremony in China. However, he runs into opposition from a mysterious female ninja who appears to be working for the same criminal organisation. Now Sherri and Michael must use all of their ninja trickery and skills if they are to have any hope of staying alive and achieving their objectives.

From the opening few minutes, ‘Golden Ninja Warrior’ could almost pass itself off as a sequel to ‘Ninja Terminator’. It picks up almost exactly where that film left off and vaguely connects the upcoming events to the infamous “Golden Ninja Statuette”. Unfortunately though, being a typical cut ‘n’ splice job, it isn’t long before the incoherency kicks in and we are left to muddle our way through what is really nothing more than a handful of cheap fight sequences and softcore pornography. While this may sound like the perfect boys’ night in, Joseph Lai does a great job of making the plot practically impossible to follow and throws in a couple of torture/rape scenes that quickly cool your ardour.

That said though, there is still a certain kitsch value to be found in ‘Golden Ninja Warrior’ and the majority of it lurks in the action. On the whole, it’s fair to say that the choreography is pretty downright awful, but when the ninjas appear the hilarity is almost unbearable. Most of the actors, particularly Yeung Huei-Chie (AKA Queenie Yang), seem incapable of fighting and rely heavily on your stereotypical karate chop. To try and make up for this, the director chooses to have them randomly transform in and out of ninja costume mid-fight. As you would expect, this technique is blatantly transparent and when the action is undercranked to ludicrous speed, you can’t help but burst into laughter.

‘Golden Ninja Warrior’ is not an easy film to watch and is often so incomprehensible that you fear your brain may explode. However, it does contain just enough bad kung fu movie clichés and shots of Yeung Huei-Chie in hot (or no) pants to keep you watching.