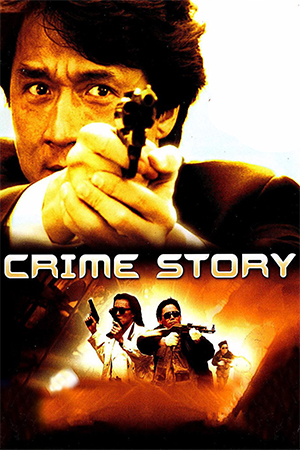 When Jet Li turned down the starring role in this gritty police thriller, few could ever have imagined that the king of kung fu comedy himself, Jackie Chan, would be the man to step in to take his place. Surprisingly though, he jumped at the chance and the resulting movie actually turned out pretty well…

Based on real-life events, ‘Crime Story’ revolves around Inspector Eddie Chan, a cop suffering from emotional distress after he is involved in a street shoot out. His psychiatrist suggests he takes a rest but he refuses and has himself assigned to protect Wang I Fei, a rich businessman who suspects he will be kidnapped. Sadly, the suspicions turn out to be correct and he is brutally taken in a high speed car chase.  Oddly enough, it turns out that Fei has been kidnapped once before so the man that solved the previous case (Kent Cheng) is brought in to help. However, it would appear that Chan’s new partner has some ulterior motives and some decidedly questionable loyalty but the case must continue regardless.  Now, a game of cat and mouse begins as Chan attempts to piece together the mystery of Fei’s disappearance but will his partner help or hinder him in his duty?

It’s a rare sight to see Jackie Chan in a film that doesn’t feature a joke or two, but ‘Crime Story’ is one of those elite few. This is not a bad thing however, as the film offers a chance to see his acting abilities, an attribute that has often been called into question by the fans and critics alike.  Thankfully he delivers the goods, making for a totally believable “cop on the edge” who must battle his inner demons whilst trying to solve the case. Perhaps you could argue that this doesn’t sound like a huge leap from his other roles, but it certainly feels like a big transition and his performance feels much more subdued. Of course, you couldn’t get away without at least a couple of fight scenes but they are sensibly grounded here and definitely in keeping with the film’s general tone.

Kent Cheng, often saddled with merely playing the “fatty” sidekick, is the other main player here and he forges a very solid on-screen chemistry with Chan. Cheng’s portrayal of a troubled, dirty cop seems like the perfect foil to Chan’s heroic persona, and the two play out a very engrossing game of cat and mouse.  It also has to be said that it’s a welcome sight to see Cheng in such a prominent role. He’s always been a very dependable and adaptable performer, but he often seems to be overlooked simply because of his frame.

‘Crime Story’ is far from being the movie that Jackie Chan fans have come to expect, and that’s exactly why it works so well. This isn’t a Jackie Chan film, it’s a very entertaining and absorbing action-thriller that just so happens to have a strong central performance from a man called Chan.