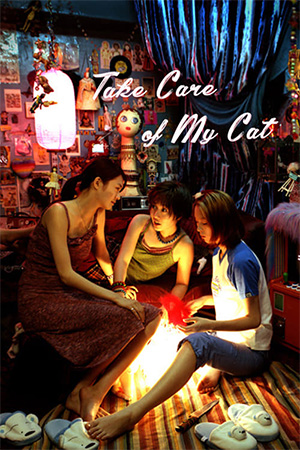 ‘Take Care Of My Cat’ is a ‘coming of age’ drama from Korea which avoids nearly every cliché the genre has to offer. Sparkling bright performances from it’s three leads and a director who really does seem to care about the material help make this a great alternative to the many romantic comedy films Korea regularly drops onto our cosy little door mat.

Korean directors seem to handle complex female characters well. While often over the top and a touch unrealistic, as in ‘My Sassy Girl’, there are still moments of beautiful reality. Things you can genuinely relate to. ‘Take Care Of My Cat’ and it’s director Jeong Jae Eun takes this entire ideal one-step further.

The film revolves around five central characters. Having been good friends in high school they are now readying themselves to take their respective places out in the big wide world. In many ways, this threatens to drive a wedge between them forever. Tae Hee (Bae Doo Na) regulates her time between working unpaid for her father’s business and trying to keep the group of friends together. Down to earth but full of hope, she has her sights on doing something a little different and at one point turns up at the local sailors bar and asks how she can get on board a ship. Hae Joo (Lee Yo Won) moves straight into an office job. Though little more than a glorified tea lady, spending money like it’s unlimited and acting as if many of the group are below her seems to be her only goal in life. Ji Young (Ok Ji Young) is perhaps the outcast of the group. Living with her grandparents in a run down apartment, she finds solace in her talent for art but embarrassment in her constant money borrowing from Tae Hee. Lastly, identical twins Ohnjo and Biryu (Eun Shil and Eun Lee) seem quite content to let nothing change. Their gentle character contrasts starkly with the rest of the group.

Director/Writer Jeong Jae Eun gets her story across with beautiful simplicity. The actresses she has employed each give inspired performances and though the movie almost seems unscripted, it never meanders. Characters act and react in a way that seems real. You occasionally feel like you’re watching a documentary on young women in contemporary Korea. It never becomes dull though. Utilising computer graphics to display each of the girls’ mobile text messages onto nearby surfaces, is just one of the neat visual tricks. The use of the ‘cat’ of the title is also clever. After finding it alone in the street, Ji Young decides to give it to Hae Joo as a birthday gift. Responsibility however is not something she needs and so she returns it. The cat is eventually passed around the group. Finding it’s way to each of the five friends. It gives us a chance to spend equal time with each character and also works as a clever metaphor. The combination of lovely cinematography and interesting music really helps you feel what it would be like to be living Seoul’s port city ‘Inchon’ and for me the entire film evoked a feeling similar to Wong Kar Wai’s ‘Chungking Express’, with themes of loneliness and isolation peeking out at every turn.

I mentioned before that this film avoids many of the clichés this genre is notorious for. Along with this comes the absence of something I feel too many films focus on – sex. No part of this story involves boyfriends or sex. The five young women in this group have far too many things to work out in their lives to be wasting time talking about sex or chasing guys. ‘Take Care Of My Cat’ is all the better for that. If it’s silly hi-jinks or crude comedy you are after then this may not be for you. That’s fine, there is always ‘100 Days With Mr. Arrogant’. If you want to see simple but effective story telling, characters you could easily bump into in the street and three of Korea’s best young actresses then just ‘Take Care Of My Cat’ for a few hours.