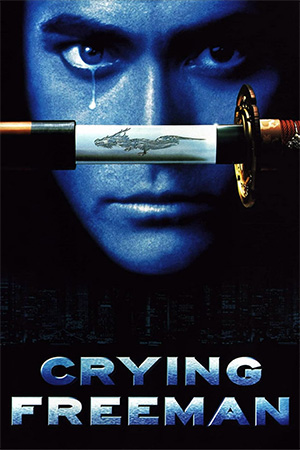 Yo Hinomura (Dacascos) is a deadly assassin for a secret organisation known as the 108 Dragons. His one weakness is that he sheds a tear of emotion every time he kills, hence his name.  On one particular mission, a woman by the name of Emu O’Hara (Julie Condra) is a witness to his bloody kills.  Yo introduces himself and Emu is immediately taken by his charm.  As Yo begins to fall for Emu, he is forced to betray the Yakuza group he belongs to and attempt to wipe out another. A love story across a sea of blood ensues and Freeman is forced to fight for the love of his life as well as his freedom.

‘Crying Freeman’ is the live-action version of the cult manga hit of the same name and is, to date, the most faithful big screen adaptation available.  The film utilises the source material well, concentrating primarily on the action side of the story with director Christophe Gans creating a dark, brooding atmosphere that is complemented by his impressive eye for stylish camera angles.  Character depth is perhaps the films weakest point as numerous background elements are often overlooked thanks to the films fast pacing, but this doesn’t prevent Dacascos from putting in a strong leading performance. Although he is often remembered primarily for his physical attributes, this is a refreshing change for Dacascos who displays Freeman’s sensitive side to great effect and shows that he is more than capable of playing a leading man.

The fight scenes in ‘Crying Freeman’ are generally skilfully shot, employing good movement of the camera to capture Dacascos’s acrobatic movements and utilising slow motion to enhance the more impressive choreography.  The editing is perhaps less impressive as it exhibits the typified American style quick cuts but thankfully it is not as prominent as it has been in some more mainstream movies.  Gunplay is also a major factor during the action and this too is of a decent standard thanks to few obvious nods to the John Woo school of bulletry.

‘Crying Freeman’ can be commended on several levels, as it manages to stick faithfully to the source material while providing a stylish, action-packed adventure that highlights the skills of fan favourite Mark Dacascos.  If any of these factors appeal to you, then ‘Crying Freeman’ certainly warrants a space in your DVD collection.