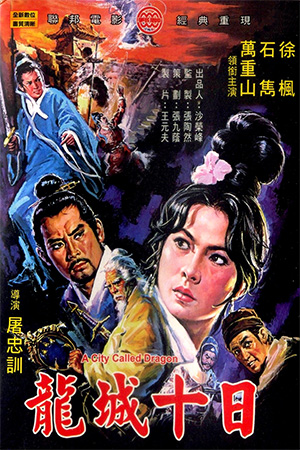 Heroic swordswoman Shang Yen-Chih works for the Song resistance against the overwhelming Northern invaders and travels to enemy stronghold Dragon city to meet an important contact. While there, she discovers that her fellow fighter has been killed and the list of military plans has been taken. Yet that is not her only problem as soon her presence in the city becomes known and escaping the walled environment is easier said than done. However, unlikely allies emerge and offer Shang a chance of escape.

Borrowing stylistic cues from Spaghetti Westerns and Italian thrillers, ‘A City Called Dragon’ is a fascinating early swordplay film from Taiwan. The glorious Hsu Feng – who would always be associated with auteur King Hu – leads the cast and, even in just her second feature, has the weight of the film on her shoulders. It says much of how magnetic Hsu Feng is that you simply cannot take your eyes off her; she’s that rare balance of beauty, brawn, vitriol and vulnerability that makes her a very real heroine who dominates each scene she is in.

‘A City Called Dragon’ also benefits from some sophisticated direction by Tu Chun-Hsun who elevates the simple material and gives each scene as lift with thoughtful framing. While not a master of atmosphere and tension like King Hu, Tu Chun-Hsun has his own way of approaching the material. It’s a real shame that his career never progressed beyond ‘A City Called Dragon’ because it shows some promise.

Ultimately, this is a swordplay film that is not quite as good as its star deserves though. One fault the otherwise noteworthy director stumbles over is the pacing; when Hsu Feng is captured the tension grinds to a halt when it should be reaching its apex. The concept of characters confined in a closed space and all of the intrigue that entails recalls ‘Dragon Inn’ yet never truly explores the possibilities. The set-pieces – which, however artistic the intentions are, should be a consideration with a genre piece – disappoint even for these very early years of modern martial arts cinema. Still, ‘A City Called Dragon’ is one of many 70s Taiwanese action films that deserve a wider audience and hopefully modest reviews like this can help.