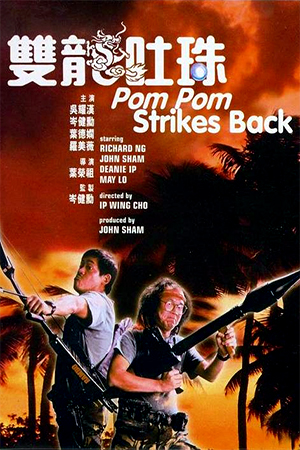 The final part in the ‘Pom Pom’ series proves to be one of the most entertaining films of the four. Once again John Shum and Richard Ng are paired as the zany cops Curly and Beethoven who are given another challenging assignment to make a mess of. This time the friends are landed with the task of protecting an important witness who is about to go to trial and send down a major criminal. The witness is far from co-operative though and the young woman continues to give her protectors the runaround. During one particular incident, Beethoven is admitted to hospital where he is given the sudden news that he is dying of lung cancer. The news turns the formerly reserved Beethoven into a supercop who risks his life for the case. Knowing his death on the case will ensure an insurance pay-out for his wife, this new supercop throws himself wholeheartedly into every dangerous situation. The farce continues when Beethoven discovers that his test results were wrong and he is in fact assured of a long life. Now the supercop turns into an opportunist who milks the sympathy from his wife and close friend. However, the distractions that had pre-occupied the team are soon forgotten when the assassin makes a final charge at the young witness.

The strength of the ‘Pom Pom’ films is the superb chemistry between John Shum, Richard Ng and, to a lesser degree, Deanie Ip. With this fourth part the formula remains in place and the whole production has the very comfortable feeling of familiarity to it. The comedy is as broad and simple as ever, but this is one of its definite charms; the simplicity means that the humour loses very little in translation. 80’s Hong Kong cinema was producing films like this in such great degree that it was perhaps difficult to appreciate them at the time. Now though the character-driven frolics make easy and undemanding viewing. Certainly not a classic, but good fun while it lasts.