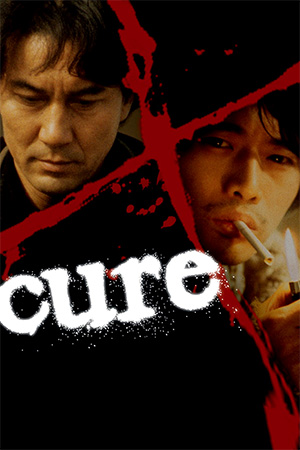 Ordinary people are randomly murdering and left with no memory of committing the crime. Perplexed by the number of bodies piling up and the seemingly innocent people who are accused of the killings, Detective Kenichi (Yakusho) desperately tries to piece together what’s going on. With the help of a local psychologist (Ujiki) the detective’s desperate hunt leads to a mysterious figure that made contact with the murderers just before they killed. Yet this figure is no ordinary soul as he suffers from amnesia, appears to talk in riddles and has an agenda that will push the sanity of Kenichi, and those around him, to their absolute limits.

‘Pulse’ and ‘Tokyo Sonata’ director Kiyoshi Kurosawa broke through with this late 90s chiller after years of directing low budget flicks. While he is perhaps more known for the aforementioned critically adored films, ‘Cure’ is quite possibly his masterpiece. A near perfect exercise in dread and suggestion ‘Cure’ is still just as gripping, shocking and baffling as it was when released some twenty years ago. A slow burn thriller that morphs into a tale of psychological horror as the likes of hypnosis, alchemy and the loss of self control all rear their ugly heads. Released before juggernauts such as ‘Ring’, ‘The Grudge’ and ‘Dark Water’, ‘Cure’ features little of the traits that would become synonymous with those J-horror titles (long haired spirits, jump scares) but does share the sense of loss, doom and uncontrollable terror that is often found in the genre.

Set in what appears to be a decaying Tokyo and filmed with long takes and washed out colours, Kurosawa creates the sense of happenings beyond our control like no other filmmaker. He uses scares and gore sparingly (save for one particularly shocking moment that must have been horrific when first seen back in 1997!), instead creating a potent sense of unease and spiralling loss of control as the true killer’s motivations come to light and our antagonist’s mind begins to break. Ambiguity is a big key here and while it’s an often overused (and lazy) trope in today’s cinema (to suggest you’ve witnessed something clever!), Kurosawa wisely keeps tight control of it so the viewer is given enough information to both draw their own conclusions while also being disturbed out of their wits. Having said that, the final 10-15 minutes perhaps does push the ambiguity factor a little far but it never derails what has come before and ends on such a clever, subtle and shocking denouncement, this can be forgiven.

It does share some style and themes with Kurosawa’s bigger genre hit ‘Pulse’, but ‘Cure’ is a tighter wound and better executed film that lingers long after the final frame. Now available on these shores after years of no release, ‘Cure’ is vital Japanese cinema and a showcase of an artist bringing their true unique vision to the screen. Hype is a dangerous thing and this film has plenty, but it more than lives up to it.