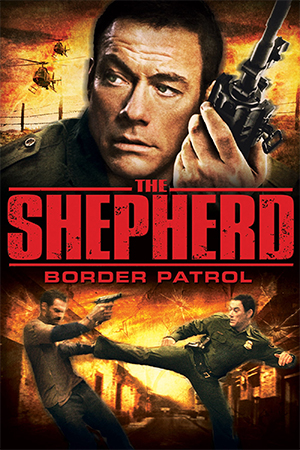 New Orleans cop Jack Robideaux (Van Damme) has opted to take up a position with the border patrol in Columbus, New Mexico. At the moment, the border patrol are struggling to fend off a highly dangerous drug smuggling operation where illegal aliens are sneaking through the border with bricks of heroin. As it turns out though, the smugglers are actually a rogue special forces unit led by Benjamin Meyers (Stephen Lord) and his right-hand man Karp (Scott Adkins), who have taken over by killing all of the major drug kingpins. Now Jack and his new partner Billy will have their work cut out for them as they try to bring down Meyers and his operation.

It’s sad but just when it looks like Van Damme is getting his career back on track he’ll suddenly take two steps backwards and appear in run-of-the-mill action fodder like ‘The Shepherd’. In fact, calling this film run-of-the-mill is probably being kind as it is often so bland that it’s just plain boring. The little story it possesses contains every action movie cliché you can think of, from corrupt cops to prison fights, and the characters on display are nothing more than horrible stereotypes. The acting is also particularly weak from everyone involved, with Van Damme looking so bored with the material that he appears to be phoning in his performance from another continent.

‘The Shepherd’ starts quite strong on the action front, with Van Damme looking sharp and Scott Adkins showing off some amazingly acrobatic kicks. Sadly though, this seems to be where the excitement ends. All of the remaining fights are just far too short to be enjoyable, and even the final duel is nothing more than glimpses of what each actor is capable of. Isaac Florentine also seems to be strangely obsessed with slow motion, using it on every single one of the fight scenes. While I’m sure this makes him think that he is being stylish, these kind of effects should only be used on particularly special moves. Using them on every single punch or kick just slows down the action and makes it look dull.

Normally I’m the first to find some sort of saving grace in all Van Damme vehicles, but ‘The Shepherd’ is just so under-par that it’s painful. Let’s hope that this is just a minor blip for Van Damme and he’ll be back making better movies shortly.