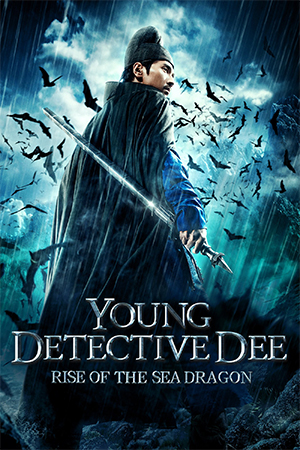 After the great success of ‘Detective Dee And The Mystery Of The Phantom Flame’ it wasn’t too surprising to see a follow-up announced soon after. What was a little unexpected was the decision to make this production a prequel, therefore jettisoning the vast majority of the old cast in favour of a younger set of stars including Mark Chao and that porcelain beauty Angelababy.

When the imperial fleet is destroyed by a ferocious sea creature, Empress Wu (Carina Lau who is the only principle cast member from the original) assigns her chief minister Yuchi Zhenjin to find out what happened and whether the events pose an imminent threat to the throne. Early on in his investigations, Yuchi locks horns with a young law officer, Dee Renjie, whose intellect and observation skills make him a useful ally as well as a significant pain in the rump. Incorruptible Dee refuses to stay out of the case and becomes further entangled when he foils the attempted kidnapping of courtesan Yin (Angelababy), leading him into the murky world of palace intrigue, neo-science and a peculiar deformed man who comes to Yin’s rescue.

I always feel a note of trepidation when the word ‘prequel’ is used; it’s often used on unofficial sequels or desperate, last-roll-of-the-dice productions trying to squeeze the last few drops out of goodwill from what was once a popular franchise. ‘Young Detective Dee and the Rise of the Sea Dragon’ manages to buck this trend, taking a popular character into a new direction before the older version of the hero has had time to put on his slippers. It should be especially noted then that Tsui Hark’s prequel to his own hit is slightly superior to its predecessor, in many ways faster and more involving than the original.

‘Young Detective Dee…’ starts with a bold opening gambit that comes straight from the mythologised world of something like ‘Pirates Of The Carribean’ and initially struggles to find the right tone. The young cast don’t have the assurance of the Andy Laus and Tony Leung-Kar Feis that the original called on. The first ten minutes, therefore, don’t do the proceeding two hours justice and there is a clear sense of a big budget production trying to find its feet. Yet Tsui Hark is the kind of film-maker who has always been able to take populist cinema in a direction that is exciting and not completely overwhelmed by empty spectacle. Hark weaves in some terrific set-pieces with the help of Yuen Bun; although the mighty Sammo Hung orchestrated the original, Bun’s use of tricky wirework and computer effects is a notch above the master on this occasion.

Even though this prequel cannot count Andy Lau in its cast, the array of newcomers and future stars do surprisingly well. Mark Chao’s Dee is given a bit more of a youthful irreverence than his taciturn older self and the writing allows the Taiwanese-Canadian actor a chance to free himself from any comparisons with Mr. Lau. ‘Young Detective Dee…’, as with so many of the new breed of big budget juggernauts, lacks a bit of the heart that made Hong Kong films in the Golden Era so enjoyable – it’s clinically clean and executed sweetly, but that nutty imagination is hard to incorporate in these relatively risk-free investments of 21st century cinema. These points notwithstanding, ‘Young Detective Dee…’ is involving fare with enough action and impetus to distract the most critical eye.