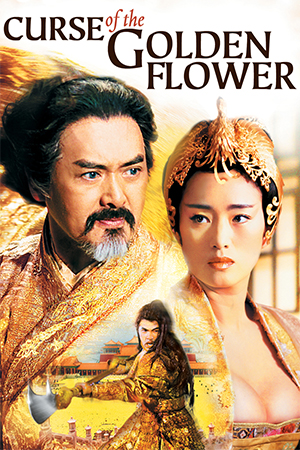 In one of Isaac Asimov’s ‘Azazel’ short stories, the eponymous pan-dimensional wish granter helps a man who wants his ex-girlfriend to sing a song so perfect that no-one who listens to it can forget it. Obviously the witty twist is that this desire is a form of vengeance against the woman he loved and those who hear her voice as all realise that not only will she never reproduce that heavenly sound again, but all who were privy to it are cursed by the fact that nothing they ever hear again can ever be appreciated in comparison. The memory of this work came rushing back as my eyes were bathed with the kind of kaleidoscopic splendour that they are unlikely to ever enjoy again. Zhang Yimou has set an enviable benchmark for cinematic beauty with works such as ‘Hero’ and ‘House Of The Flying Daggers’, but this is surely the most ravishing production he, or anyone else for that matter, is ever likely to make.

Emperor Ping (Chow Yun Fat) reigns over a vast Chinese kingdom and an intricate court of concubines, advisors and ambitious offspring. His empress, Phoenix (Gong Li), has fallen out of favour over the years and is now isolated as a mere figure-head used to keep the country’s morale buoyant. Phoenix has continued a secret affair with one of her adopted sons, Wan (Liu Ye), but Ping knows more than he appears to show and slips poisonous fungus into her daily medicine to slowly send her insane. Meanwhile one of the sons, Jai (Chou), is being groomed by his father to take over the responsibilities of an emperor in the near future, yet he tries to act as a mediator between the warring parties in his family. As Phoenix begins to realise her fate and the secrets Ping himself harbours, she starts to embroider a golden Chrysanthemum on the robes of her sons and those dear to her. Jai uncovers the meaning of this flowers and sides with his adopted mother in a bid to usurp the increasingly despotic emperor.

Every single frame of every single shot is furnished in the most resplendent array of colours I have ever seen on celluloid. Cinematographer Zhaon Xiaoding and costume designer Chung Man Yee are blessed with eyes for detail that would have Van Gogh himself desperately trying to compete with, the Dutch artist himself being such a good exponent of using vivid colours albeit in a different medium. Many films claim to be works of art, but ‘Curse Of The Golden Flower’ is truly a production of such breath-taking exquisiteness that it will be appreciated for many years to come for its aesthetic magnificence. Yet ‘Curse Of The Golden Flower’ is also a relatively involving film with a story that engages and a love of Shakespearean drama that thrills.

Although it still has a cold heart beating in its body, it nevertheless captures the imagination in the way that ‘House Of The Flying Daggers’ failed to do. Many of the characters are unsympathetic and the treachery of the imperial court impossible to relate to, but the drama is much more involving than Yimou’s last foray into the genre. The action may be considerable less impressive, yet the marriage of spectacle and storyline is far stronger than previous attempts. Modern swordplay films are always austere affairs where statuesque characters look into middle distance before bursting into rhetoric and this epic production fails to shake off that nagging sensation – the sheer self-importance of it all cries out for a drunken beggar to amble onto the screen (dubbed of course) or a cackling villain complete with hairy mole to interrupt the pomposity. That obdurateness is the nature of the beast and very much a part of what is expected of this latest wave of arthouse epics. The eyes feast while the heart starves, yet the quality of the film is undeniable.

One of the other pleasures of ‘Curse Of The Golden Flower’ is the way director Zhang Yimou combines his talents behind the lens with two legends of Asian cinema in front of it. Yimou fashions a number of grandstand scenes for the two grand thespians to battle in and allows each an equal share of the spoils. The direction remains unfussy – ironic given the opulence on offer – and puts the onus on the talent assembled in the cast. Chow Yun-Fat is excellent as the dictator manipulating situations around him, but he is matched minute-for-minute by the spellbinding Gong Li. Forever Yimou’s great muse, Li is an actress who can portray such a vast spectrum of emotion from her eyes that it almost seems as if the dialogue is redundant. Jay Chou is stretched beyond his usual comfort zone as the naive Jai though he is clearly out of his depth alongside the films two main stars. Liu Ye, one of China’s most acclaimed actors, is the most disappointing addition to the cast, too ready to overact considering his heralded talents. Nevertheless, the performances are mostly fitting for a production of such a magnitude.

‘Curse Of The Golden Flower’ is another sign of the growing confidence of Chinese cinema, the imagination of Zhang Yimou and the iconic status of Gong Li and Chow Yun-Fat. Both of the latter banish thoughts of their appearances in Western productions that are often beneath them and remind us how involving first-rate acting can be. Most of all though, this is a triumphant statement of how utterly beguiling cinema can be. It’s sheer visual brilliance is what remains etched in the memory when the credits roll – any of the other weakness are subsequently hard to remember.