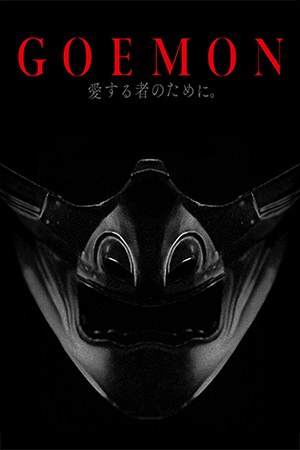 Kazuaki Kiriya shakes off a four year absence with an update of the Japanese folk tale ‘Goemon’. It’s neither as confusing nor patronizing as his last film ‘Casshern’, and with a bigger budget and Ninja action it should appeal to fans of the character and newcomers alike. The chintzy CGI won’t suit perfectionists but the film boasts breathless action sequences and a witty pseudo history lesson.

For those new to the tale, Ishikawa Goemon was a 16th century Ninja-Bandit and Hero in the vein of our own Robin Hood. Put to death in 1594 after a failed assassination attempt on Hideyoshi Toyotomi, Goemon was boiled alive. Further historical information is sketchy and over time he has become a much loved figure in Japan, being the inspiration for many Kabuki plays and even having his own video game series.

Kiriya takes the seeds of the legend and builds around them an epic tale of heroism and sacrifice, punctuating the historical beats with neat storytelling flourishes and a keen eye for emotion. The Edo era conflicts are a bit complex for newcomers (think ‘Red Cliff’), and half the fun is in how he hijacks actual historical moments, turning each on their head without ignoring them and giving the audience something unique but plausible. If you know a bit about Feudal Japan, you’ll be intrigued all the way to closing time, but even if you don’t there’s still plenty to chew on here.

The director publicly acknowledged his previous film, ‘Casshern’, had weaknesses, citing a tight production schedule and poor funding (under $6 million US) in his defence. He promised no such shortcomings with ‘Goemon’ and in my estimation he delivered. The pace is sharper, the characters deeper and the action sequences are a marvel to behold, whether swinging between burning ships over the moonlit sea or facing off against a fellow Ninja through lush green fields and over the side of a waterfall, the film looks stunning. CGI is utilized for 90% of the film, which enables him to mount display of some of the most multi-tiered and jaw dropping Ninja battles ever committed to film.

Considering the difficult nature of a film of this ilk, the cast perform admirably with Yosuki Eguchi coming off as a likeable hero with just a dash of the dangerous. Ryoko Hirosue is underused but makes a fine leading lady as the ethereal Chacha, royal princess and Goemon’s childhood sweetheart. They are backed up by genre stalwarts Masato Ibu (‘Azumi’, ‘Onmiyoji’) as Leyasu and Eiji Okuda as Hideyoshi Toyotomi. Both add gravitas to proceedings and have the acting chops to help elevate the green screen shenanigans beyond their own enjoyable kinetic lunacy.

A PV and fashion Photographer maestro, Kiriya’s talents usually lay in the editing and cinematography of his work but in ‘Goemon’ he gives the story room to breathe and dispels the notion that music video directors don’t translate well to cinema. It’s really his film, being director, editor, writer and cinematographer, along with taking on an acting role, and he’s crafted a visually intricate tapestry of heroic tomfoolery met with tragic consequence. Chances are, if you’re a fan of Japanese war history or the Goemon legend, you’ll be pleased as punch with this update. Even if you’re not, Ninja action has never been so beautiful.