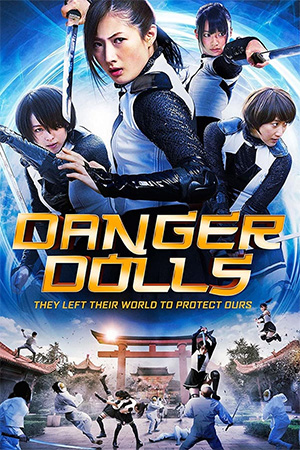 In a parallel universe where nuclear weapons have long since been abolished and relative peace remains, an extra-terrestrial threat appears in Japan. This threat, a trans-dimensional cult, send their brain-washed followers through a portal to take over the Earth. In their way is a quartet of samurai-sword wielding young women whose work is overseen by a mysterious benefactor. When their investigations threaten to alert the invaders, the team decide to pose as a J-Pop group to continue their work unnoticed.

I was shocked to learn that ‘Danger Dolls’ was directed by Shusuke Kaneko who, a few years earlier, helmed the big budget ‘Death Note’ adaptation. It’s almost like finding Michael Bay working for Asylum Pictures though that isn’t necessarily an idea without charm. ‘Danger Dolls’ seems to have been recorded on someone’s iPhone and there are a greater range of sets in an Andy Milligan film than this one. While I have no problem with low-budget films, I do have a problem with ones that are nonsensical and, worst of all, boring.

‘Danger Dolls’ has plenty of shots of the very able actresses beating up faceless goons. It’s literally three quarters of the film in fact. As the choreography makes very little use of it’s stars skills (Rina Takeda is especially wasted), this becomes boring after the five minute mark. And it’s not like the storyline will help you through; the plot is abysmal and large parts of this movie makes no sense whatsoever. All in all then, ‘Danger Dolls’ is a shocker.