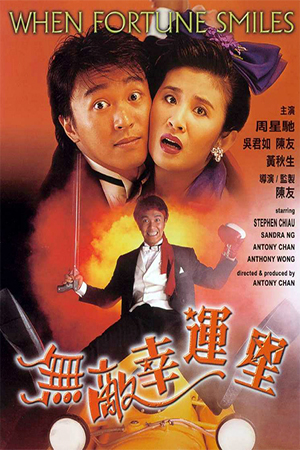 The early 90’s were to see Hong Kong star Stephen Chow’s stock go through the roof as he firmly established himself as the undisputed king of Cantonese comedy. This was achieved with a series of box-office smashes; the ‘God Of Gamblers’-pastiche ‘All For The Winner’ and the action comedy ‘Fight Back To School’ were foremost among these and both featured in the final box-office charts of their respective years. Before this huge success, the Canto-comic starred in a number of serious roles and a handful of comic roles that would finally give the hint of greater things to come. ‘When Fortune Smiles’ presents the earlier comic persona of Chow in the role of arrogant protagonist turned good that would later reappear in films like ‘Tricky Brains’ and ‘God Of Cookery’.

Tricky Star (Chow) specialises in simple cons and money making scams to get by in life. One such trick – using a vacuum cleaner to steal money from gambling tables in a low-rent casino – lands him in serious trouble with a maniacal gangster who has designs on parting Tricky Star from a part of his body. However, the gangster hits upon a scheme to get the inheritance of a will that he has been excluded from; the will of a dying tycoon dictates that only his daughter will inherit the considerable fortune with the rest of the money-grabbing family excluded. Tricky Star is forced to infiltrate the home of the desperate family and, after locating the will, change it to the advantage of certain factions. What is already a complicated situation is further confused when the shady son of the tycoon discovers Phoenix (Ng) – a rubbish collector who has an uncanny resemblance to the missing daughter. In an equally dastardly scheme, Phoenix is hired to impersonate the missing daughter and get the contents of the will. She soon discovers that her good-nature is at total odds with the atmosphere around her and that the only real friend she can rely on is Tricky Star; naturally, this friendship soon turns into love between the two. The culmination of these events sees the son get his hatch a plot to get rid of the entire family and escape with the money – but he doesn’t count on Tricky Star who is in hot pursuit.

Chow slots straight into his role as Tricky Star with clear indication of the character who he would play in the future with great success. The combination of dead-pan delivery and sudden rubber-faced antics is on good show in ‘When Fortune Smiles’ as there are enough situations for him to show his comedic talents off. With actors like Anthony Wong and Shing Fui On to play off, this is performed with ease. A pleasant surprise comes in the shape of Sandra Ng’s delightful turn as Phoenix, combining a sweet-nature with an encouraging naivety. This performance is quite different from some off the loud-mouth comic roles that constituted the body of her early work. Good performances do not answer the question of whether or not this comedy is hilarious or not though. The answer is that ‘When Fortune Smiles’ is a funny Chow comedy that never quite reaches anything more substantial or more uproarious. There are some excellent moments – namely the final battle between Chow and supervillain Billy Chow – but the gaps between strong laughs is longer than it should be. Chow’s brand of comedy can be challenging to a non-Chinese audience, but there are jokes that break through the language barrier and raise a chuckle – the film therefore remains entertaining throughout its duration. Although this film is not his very best, it is still worth watching for Hong Kong newcomers and is a definite recommendation for Chow completists.