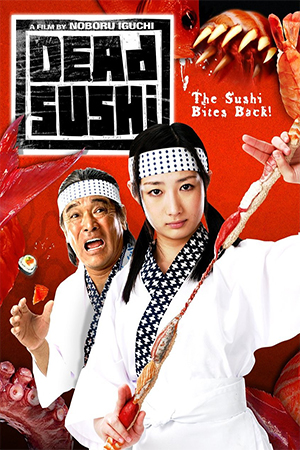 ‘Machine Girl’, ‘Mutant Girl Squad’ and ‘Tomie Unlimited’ director, Noboru Iguchi’s latest is just as mad, bad and rad as any of those films. Extremely silly, camp, surreal and gory, ‘Dead Sushi’ is a bonkers ride of flesh eating sushi, kung fu, flying squids, sushi sex (!) and a daughter’s quest to earn the respect of her father. Obviously! ‘Ninja Girl’ and ‘High-Kick Girl’ star Rina Takeda is Reiko who decides to runaway from home when her overbearing father’s karate coaching and sushi making training just becomes too much for her. She takes a job at a resort hotel as a waitress, which is renowned for its excellent sushi. No sooner has she started work she falls prey to the other bullying waitresses, challenges the head sushi chef on how awful his sushi making skills are, gets into a kung fu fight with some of the guests and then has to deal with an outbreak of sushi come to life which in turn starts to maim, kill and eat the rest of the guests! What follows is a whole lot of inappropriate zany gory killer sushi awesomeness.

Iguchi seems to be on a one-man mission to create a series of over-the-top and gory live action adult cartoons (‘Looney Tunes’ on acid if you will!) and ‘Dead Sushi’ is no different from the rest of his recent oeuvre. Perhaps it’s a little lighter in tone than some of his previous work and the while there is still  a good dose of gory effects and mad creations, ‘Dead Sushi’ goes for a more campy fun tone than constant in your face gore. In fact, Dead Sushi is really rather funny: the whole concept of sushi coming to life to kill people played to the tilt for laughs and the energetic cast embracing all the mad flesh eating sushi madness. The film is equal parts daft and creative, scenes jumping from silly kung-fu fights (the genius and hilarious fight Reiko has with some goons), to perverse hi-jinks (that slimy kiss with a raw egg!) to all out gore (some poor fella having his face ripped off by a flying squid!). Working with long time collaborator and special effects whiz Yoshihiro Nishimura (‘Tokyo Gore Police’, ‘Helldriver’) the pair cook up another array of crazy creations including a giant fish headed bad guy for our heroine to throw down with come the finale.

While this sub genre of gory, fruit loop, Japanese horror is possibly reaching breaking point (I’m looking at you ‘Deadball’!) ‘Dead Sushi’ is still very entertaining as Iguchi is perhaps a better filmmaker than he is given credit for. His casts always give the right amount of energy for these types of films, he often keeps his narratives tight (meaning the insaneness doesn’t drag on too long) and he knows when to pull back on the gore and sleaziness and throw in a good action scene or two: Dead Sushi features several decent fights where Takeda gets to cut loose with the high kicks. In fact, Iguchi’s secret weapon in ‘Dead Sushi’ is Rina Takeda who gives a wonderfully sweet and lively performance meaning there is somebody likeable to root for in amongst all the gore, perversion and just outright insanity. Plus, if you ever wanted to see two pieces of sushi have sex, well, this is the film to show you that!