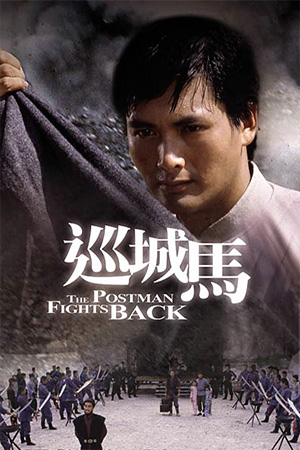 During the Republican era, an evil warlord instructs his right hand man to find four suitable candidates to transport his valuable gifts across dangerous grounds.  He recruits four men; a postman (Leung Kar-Yan), a thief (Yuen Yat-Choh), a dynamiter and a conman (Chow Yun-Fat).  The only instructions given to them are to never open the cargo and to deliver it within seven days.  After numerous ambush attempts the group begin to become suspicious but they have no idea of the horror that awaits them and the consequences of completing the mission successfully.

‘The Postman Fights Back’ is an enjoyable and somewhat original action romp that blends the traditional old school kung fu movie with the formula for the Hollywood western. Fan favourite Leung Kar-Yan takes centre stage and gives another strong performance, although there is no denying that the show is definitely stolen by Chow Yun-Fat. While the genre is far from his forte, Yun-Fat seems capable of adapting to any role and he proves to be exceptionally charismatic as the cocky conman. The film also includes some solid fight scenes, most of which are particularly memorable thanks to the over-the-top villains.

Whilst fans of the Shaw Brothers back catalogue will definitely find ‘The Postman Fights Back’ comfortable viewing, there is still enough fresh material and wackiness here to make the film worth watching. Yun-Fat fans would also be advised to seek this one out as it puts yet another notch on his belt full of amazing performances.