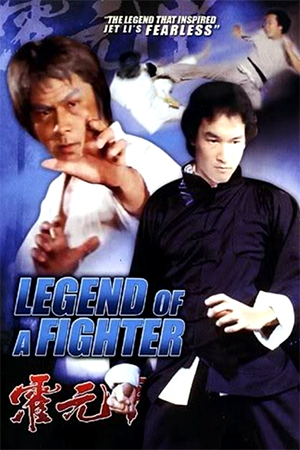 The Huo martial arts school has a very strict code of conduct. The family plaque clearly states that they will not teach the weak, cheats, or strangers. Huo Yuanjia (Leung Kar-Yan) is the youngest son and is forbidden to study as his father perceives him to be too weak.  One day a mysterious man by the name of Kong Ho-San (Kurata) is hired as a teacher, and claims to have no interest in the martial arts. However, it is soon revealed that he is in fact a champion fighter and Yuanjia begs to be taken as his student.  Ho-San is only able to offer some advice before he is forced to leave on urgent business.  In the 12 years that follow, Yuanjia studies the Huo style in secret and eventually becomes the major heir to the school. When a Japanese challenger starts defeating all the local schools, it is up to Yuanjia to battle for the honour of his family and the Chinese people.

‘Legend Of A Fighter’ is based on the life of Huo Yuanjia, a legendary martial artist who was also the inspiration for Bruce Lee’s ‘Fist of Fury’. Therefore, it’ll come as no surprise to hear that this film bears more than a passing resemblance to what was arguably Lee’s finest hour.  For this incarnation though, Yuen Woo-Ping takes up the reigns and is keen to make the project his own. He introduces a much stronger and more patriotic vibe to the proceedings, as well as injecting a bit of comedy to lighten to the mood. Leung Kar-Yan also makes for a very good fit as Yuanjia, as his transformation from unskilled student to martial arts master is extremely convincing and he definitely has the gravitas for such an iconic figure. It’s just a shame that he occasionally feels the need to try and impersonate Lee, battle cries and all.

The action in ‘Legend Of A Fighter’ also proves to be hugely enjoyable, with a number of intricately choreographed fights that utilise the classic animal styles. As with a lot of the Woo-Ping and Ng See-Yuen collaborations, there’s the odd hint of humour mixed into the combat and the film definitely has a similar tone to the likes of ‘Drunken Master’ or ‘Snake in the Eagle’s Shadow’. Although he is not a classically trained martial artist, Leung Kar-Yan works well during the combat and his final duel with Yasuaki Kurata is particularly memorable. The only minor disappointment is the often excessive use of undercranking, which forces a couple of the sequences to slip into ludicrous speed.

Considering they both draw inspiration from the same source, it’s no surprise that ‘Legend Of A Fighter’ often feels a little too similar to ‘Fist Of Fury’. Luckily though, Yuen Woo-Ping is more than capable of crafting out his own tale and ‘Legend Of A Fighter’ remains a very solid kung fu flick in its own right.