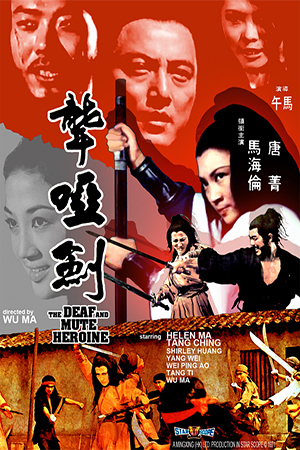 The recent death of one of Hong Kong’s most familiar faces, Wu Ma, prompted me to finally catch up with his most famous work as a director, ‘Deaf and Mute Heroine’. Although primarily known as a character actor, Wu Ma had ambitions beyond this and worked alongside Chang Cheh on a few features before trying his hand at the craft himself.

A young woman who happens to be death and mute clashes with a group of bandits and disappears with their booty, leaving them severely depleted thanks to her sword skills. The bandits’ chief is a poison-dart throwing femme fatale who, having lost face, is desperate to track down the swordswoman and so sends her minions to the inns in the area to find where she is hiding. The ensuing battle sees the heroine badly injured and so is only saved from death by the intervention of a villager, Yang Shun, who nurses her back to health. The grateful mute begins to see a way out of the life of bloodshed she has been forced on and begins to plan spending the rest of her days as Yang’s wife. Unfortunately the bandits are still keen to find their stolen gems and devise a plan to bring her out of hiding.

Wu Ma worked as Chang Cheh’s assistant on ‘Golden Swallow’, the much-loved female swordplay film and this influence can clearly be seen in ‘Deaf and Mute Heroine’. Once again we have a socially-awkward, beautiful yet deadly warrior defeating armies of assailants and torn between her current life and the man she loves. The slight twist here, as the title mentions, is that the protagonist has a greater disadvantage than usual, a factor that ups the ante during the many confrontations she faces. It’s a way of making the hero/heroine’s odds even greater as borrowed from Chang Cheh’s ‘The One-Armed Swordsman’ and Japan’s much loved ‘Zatoichi’ films and works well here. Her skill is expertly introduced with an exquisitely designed credit sequence that borrows the Shaw Brothers’ trick of filming bold fight scenes on sound stages bathed in surreal lighting. Clearly, Wu Ma was keen to show that his time working with one of the genre’s great auteurs had not been forgotten.

Yet, while Wu Ma is not averse to borrowing from mentor Chang Cheh, he also shows a flair for creating atmosphere  that recalls King Hu. The way each set, from inn to abandoned temple, is soaked in tension and the intentional use of dripping rain and stormy wind just makes ‘Deaf And Mute Heroine’ a feast for the senses. Add to this a finely-tuned set of characters – Helen Ma’s troubled heroine is seen in fully-fledged action and vulnerable introspection while Tang Ching is suitably naive as the romantic interest who needs saving by her.

‘Deaf And Mute Heroine’ is the crowning achievement of Wu Ma’s modest directorial career. It’s rough around the edges and doesn’t always keep the pace consistent, but it shows real promise that was never quite realised. Wu Ma will always be more familiar as one of the most recognisable faces of the golden era of Hong Kong cinema; nevertheless, this is a swordplay flick that serves as a fitting tribute to someone brave enough to extend his career into other avenues.