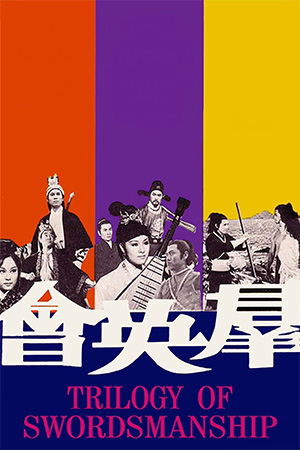 The obvious difference between ‘Trilogy Of Swordsmanship’ and its many contemporaries at Shaw Brothers is the portmanteau structure employed by the film makers. This episodic execution had long been a popular conceit in Western cinema, particularly in the horror genre, but the swordplay genre had never embraced the idea prior to this. This brave attempt to try something distinct within a genre already swamped with lesser efforts by 1972 is the initial draw of the production.

The first story, ‘The Iron Bow’, follows a mother and daughter who run a hillside inn. The latter is pursued by a lecherous local general, but she insists that only a man who can fire her late father’s sacred bow can have her hand in marriage. His pitiful attempts show he is clearly not the chosen one, yet a mysterious stranger (Yueh Hua) who intervenes in the situation seems far more appealing to the daughter. The general, however, cannot forget his slight and sends his army to capture the woman he longs for and avenge his shame.

This is followed by ‘The Tigress’, a story that focuses on a famed courtesan and her love for a soldier. When the soldier disobeys a direct order from the government, his superior calls for his execution on grounds of gross insubordination. Just as he is about to be executed though, his lover arrives to plea for clemency and get the decision reversed. The minister is unimpressed, yet this tigress does not stop until she finds a sympathetic ear and a way of saving the man she loves. This is finally achieved but on one condition: they must now apprehend a vicious bandit as recompense.

‘White Water Strand’ is a traditional story of heroism and battles against corrupt governments. When a rebel being transported across China for execution is saved by his comrades, the timely intervention of a righteous swordsman stops a potential bloodbath. The hero becomes good friends with the rebels despite being on the other side of the law and the friends vow to meet again. This promise is redeemed when the roles are reversed and the rescuer now needs to be saved from being beheaded by his corrupt colleagues.

Despite its unusual construction, ‘Trilogy Of Swordsmanship’ is a routine early-70s swordplay film. Each segment follows an expected pattern with common themes of chivalry recurring throughout. What makes the mundanity of the stories so difficult to forgive is that each part is a fresh start, yet none of three really stand out. The final story has a very slight edge over the proceeding parts thanks mainly to Ti Lung, David Chiang, Ku Feng and vastly superior choreography. The previous sections are more operatic than action-packed and tend to wear the patience thin even at little more than 30 minutes a piece. ‘The Tigress’ does at least have a slight twist at the end; it’s such a disappointment that this rarely used device is used in this genre and ‘Trilogy Of Swordsmanship’ sorely misses that edge.

Though there is talent behind the lens and in front of it, this is a run-of-the-mill swordplay film with a wasted gimmick. Genre fans would be advised to look elsewhere for excitement as this is a very ordinary film masquerading as something special.