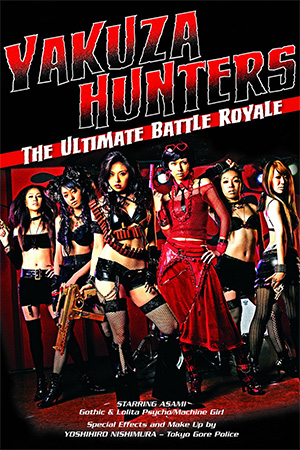 After Asami is betrayed by Junko, a former member of her all girl gang, she is tied up and left for dead. However, she manages to struggle free and kills the man who is supposed to be watching her. Returning to town several years later, Asami finds that Junko now works for the Yakuza and her home town has become a den for drugs and prostitution. Teaming with four other gun-toting babes, Asami forms the Yakuza Hunters to take on the gangsters in the ultimate, all-out, battle royale to the death!

If the opening few minutes of your film feature a topless Asami bludgeoning someone to death with a cross, it’s pretty clear that you’ve stumbled into the wacky world of Japanese VCinema. As you would expect from a movie with an intro like that, ‘Yakuza Hunters’ isn’t exactly high brow and is more your typically Japanese combination of both boobs and blood. That said though, don’t go expecting another ‘Machine Girl’ as ‘Yakuza Hunters’ is clearly more influenced by the works of Meiko Kaji than anything else. This fact is never more evident than in the 70’s style backdrop, which combines nicely with a cheesy soundtrack and simple revenge storyline to dish up a generous helping of campy fun. Of course, it is still hampered by the low budget and limited resources, but if you’ve seen any other outings in the genre then you’ll know exactly what to expect.

Talking about the action in these types of films is starting to get fairly repetitive, as they generally consist of a great deal of quick cuts, flashing blades and plenty of CGI blood. ‘Yakuza Hunters’ is no exception to these rules, sporting some amateurish fights that often reminded me of the “Kerpows” and “Kersplats” of the old Batman television series. Still, I don’t think we are ever expected to take any of it particularly seriously and the addition of comedic combat and bizarre weaponry would seem to corroborate this. So, if you can accept the fact that you aren’t going to get any professional martial artistry early on, then you’ll no doubt get sucked in by the general silliness of it all.

‘Yakuza Hunters’ is another fairly typical helping of cheap, cheesy action cinema from Japan, albeit with a slightly less over-the-top approach. If you’ve been entertained by any of the other recent blood-soaked outings to emerge from the territory, then this is probably another movie you’ll want to add to your watchlist.