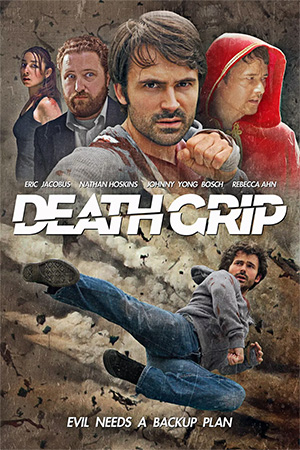 A few years back the San Francisco action collective known as The Stunt People proverbially kicked the martial arts movie in the face with their immense feature debut, ‘Contour’. They return, after various shorts, live shows and general kicking people in the face, with their sophomore feature ‘Death Grip’. While this new fight flick features various aspects that made ‘Contour’ so successful (comedy and kung fu), Eric Jacobus and his Stunt crew go in a slightly different direction for this outing and produce equally entertaining and full on fighting results.

Jacobus stars (as well as writes, directs, action choreographs and if the bloopers are anything to go by, provides some of the sets) as Kenny, a one time loser recently made the guardian of his autistic brother Mark (Hoskins), who has been released from care. Letting Mark tag along on a last minute catering gig Kenny has got, providing food for a museum exhibition, Kenny and Mark soon find themselves in danger when an armed and masked gang storm the proceedings with the intention of stealing a priceless coin. The gang are from a mysterious cult and want the coin, which wields special powers, so their leader can use it in a ceremony in order to ascend the ranks of the cult. Trouble is, Mark, who through his special knack for remembering key codes, has the coin. It’s not long before they’ve snatched Mark and high tailed it with Kenny in tow. Luckily for Kenny and unfortunately for the bad guys, Kenny knows how to kick ass (most of the time!) and kick some ass he does.

The Stunt People are one of the most creative action, and comedy, teams out there today. Managing to find an almost perfect balance between laughs and thrills, ‘Death Grip’ may be a more serious film than ‘Contour’ but it is still as packed with chuckles, as it is with action. However, the comedy on show here is more subtle and inventive and never detracts from the serious aspects of the plot: kidnap, strange cult sacrificing people, full on violent action. Much of the comedy comes from the gentle relationship between Kenny and Mark as they begin to reconnect (attempting to play baseball and failing miserably) and Mark’s little quirks as he attempts to readjust to everyday life again (replacing the top quiche on a pile of quiches every time somebody takes the top one so the pile always looks perfect: a subtle, tiny moment but possibly the funniest in the entire film). Actually, the funniest moment has to be the scene involving the rather sensitive sensor on a broken toilet that befuddles our two leads and then plays a hilarious part in a fight scene when bad guy Johnny Yong Bosch turns up. Ok, that might not make much sense reading that (an electronic toilet both funny and instrumental in a fight scene!) but it all works perfectly and is just one of many scenes that makes ‘Death Grip’ so damn enjoyable.

But, this being The Stunt People what about the action? Well, and non-surprisingly, it’s brilliant. While not as thick on the ground as in ‘Contour’, the fight scenes are absolutely worth the wait. Crisp, full of creativity and in ‘Death Grip’s case, often bloody, The Stunt People continue to excel in fight choreography and creativity: from the aforementioned toilet fight scene, to a wicked knife fight scene (which shows you don’t need lots of ridiculous editing to convince a viewer something cool is actually happening!) to the one-on-one between Jacobus and Yong Bosch (we should have had more of this, please!) the fights are full on, toe-to-toe, fist-to-fist confrontations. Not to mention continuously inventive (Kevin’s trick of imagining what he thinks the fight will go like and then the actual, much more painful, reality unfolding) and fun to watch (the genius fight in the dark!).

Ok, I could wax lyrical about the film for a while longer as ‘Death Grip’ really is great stuff from a director and team who know how to put a fight film together. Needless to say, this is a great follow up to ‘Contour’ and another success for The Stunt People.