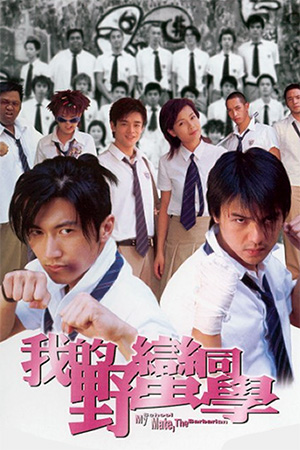 One of the most important figures of the late 80s – early 90s new-wave of Hong Kong cinema was Ching Siu-Tung. Wowing audiences with the superlative ‘A Chinese Ghost Story’ trilogy and then adding his flair to ‘Swordsman 2+3’, it seemed likely that he would be the next Hong Kong directors to make a splash in Hollywood. It’s therefore strange observing how his career has descended into very ordinary features of recent years and the assorted role as action-choreographer. Wong Jing’s ‘My School Mate, the Barbarian’ gives Ching the chance to adopt the latter position and as such it is good to see his involvement in a reasonably big production.

After being framed for sexual harassment by his ex-girlfriend, prodigious student Edward (Fung) is forced to finish his final few months of education away for the elite. Following a case of crossed wires, Edward finds himself exiled to one of Hong Kong’s low level schools which, although frowning upon triad involvement, turns a blind eye to the traditional fisticuffs. He is immediately greeted by one of the local bullies and is soundly beaten in the ensuing duel. Edward is thankfully befriended by attractive student Phoenix, who nurses a secret crush on him, and Stone, a quiet classmate who has a formidable reputation as a fighter. Although having vowed never to fight again, Stone (Tse) is persuaded to train the newcomer in exchange for help with his studies. However, current school fighting champion Mantis wants to challenge Stone’s legendary reputation and uses his trainee as a way of getting what he wants. Then there’s also the matter of a gang of triads who are keen to exploit the students at the school and agree to avenge the slimey bully who is eventually defeated by Edward in a fight.

Those in search of art rarely gravitate towards a Wong Jing film and ‘My School Mate, the Barbarian’ does not change this matter. Thankfully though, this is a pleasantly daft film that achieves its objective to entertain. Key to the enjoyment of the production is the now well-developed chemistry between Stephen Fung and Nicholas Tse; after sharing screen time in a number of features, the pair are a natural combination that distracts the viewer from the faults of the film. There are the usual Wong Jing-isms i.e. a screeching female lead, surreal humour that fails to deliver and over-the-top directorial touches, but here there is enough reasons to keep watching. Ching Siu-Tung’s action choreography is well-performed by a cast who are mostly not martial artists though the aforementioned stylistic touches by Wong Jing do sometimes detract from the action. ‘My School Mate, the Barbarian’ is an unusual film that centres on a world of youths (played by actors four or five years older than their characters) that rarely touches that of the adult realm. If the viewer can get used to this, they should enjoy the rest of the duration.