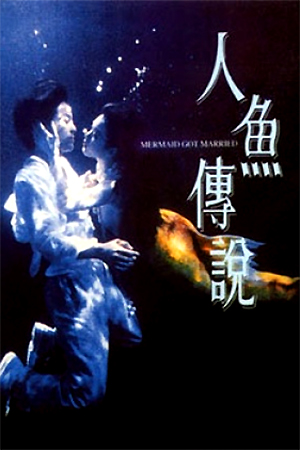 Chow (Cheng) is the new teacher at a Hong Kong secondary school who attracts the attention of one of his female pupils, eager to make her boyfriend (Kaneshiro) jealous. This seemingly common situation is turned on its head with the arrival of beautiful student Christy (Chung) who seems equally keen to endear herself to Chow. However, the real reason is that Christy is a mermaid and, after saving Chow from drowning, needs the pearl he has in his possession to return to the sea. Though the task is a straight-forward one, Christy finds herself falling in love with the nervy teacher and is now causing waves among the other students when they find out. After an accident reveals Christy’s true identity, the authorities move in and openly exploit this extraordinary woman – an action that unites the students and lovestruck Chow who decides to rescue her.

As the brief synopsis indicates, ‘Mermaid Got Married’ is a Hong Kong remake of the popular U.S. comedy ‘Splash’. While the Tom Hanks feature succeeded in taking its unlikely storyline and creating a overwhelmingly likeable production, Norman Law’s eastern remake fails to hit the same heights. The cast are suitably entertaining – Christy Chung is customarily gorgeous while Ekin Cheng is an inoffensive lead actor. While the chemistry between the two fails to ignite any sparks, both performers are watchable enough to help paper over some of the film’s cracks.

The main reason why ‘Mermaid Got Married’ falls short of its U.S. inspiration is that it never retains the pace and verve of its opening twenty minutes. Though director Norman Law sets up a few interesting rivalries between the characters, the film tends to get too bogged down in its teen romance sub-plot. Had there been a greater concentration on the actual dynamic that pits the lead lovers against the powers that be, ‘Mermaid Got Married’ may have been more than just a vehicle reliant solely on charm. To see such an enjoyable romantic comedy as ‘Splash’ be remade into a somewhat anaemic Hong Kong feature does little to inspire. This missed opportunity is therefore a moderate recommendation rather than a must see flick.